Now, FLEET researchers at Monash University, Australia, have for the first time successfully 'switched' a material between these two states of matter via application of an electric-field. This is the first step in creating a functioning topological transistor - a proposed new generation of ultra-low energy electronic devices.

Ultra-low energy electronics such as topological transistors would allow computing to continue to grow, without being limited by available energy as we near the end of achievable improvements in traditional, silicon-based electronics (a phenomenon known as the end of Moore's Law).

This new study is a major advance towards that goal of a functioning topological transistor.

"In these edge paths, electrons can only travel in one direction," explains lead author Dr Mark Edmonds. "And this means there can be no 'back-scattering,' which is what causes electrical resistance in conventional electrical conductors."

"This new switch works on a fundamentally different principle than the transistors in today's computers," explains Dr Edmonds. "We envision such switches facilitating a completely new computing technology, which uses lower energy."

The electric field induces a quantum transition from 'topological' insulator to conventional insulator.

To be a viable alternative to current, silicon-based technology (CMOS), topological transistors must:

While switchable topological insulators have been proposed in theory, this is the first time that experiment has proved that a material can switch at room temperature, which is crucial for any viable replacement technology.

(In this study, experiments were conducted at cryogenic temperatures, but the large band-gap measured confirms that the material will switch properly at room temperatures.)

ICT ENERGY USE, THE END OF MOORE'S LAW AND 'BEYOND CMOS' SOLUTIONS

The overarching challenge behind the work is the growing amount of energy used in information and communication technology (ICT), a large component of which is driven by switching.

Each time a transistor switches, a tiny amount of energy is burnt, and with trillions of transistors switching billions of times per second, this energy adds up.

For many years, the energy demands of an exponentially growing number of computations was kept in check by ever-more efficient, and ever-more compact CMOS (silicon based) microchips - an effect related to the famous 'Moore's Law'. But as fundamental physics limits are approached, Moore's Law is ending, and there are limited future efficiencies to be found.

"The information technology revolution has improved our lives, and we want it to continue," says Prof Michael Fuhrer.

"But for computation to continue to grow, to keep up with changing demands, we need more-efficient electronics."

"We need a new type of transistor that burns less energy when it switches."

"This discovery is a step in the direction of topological transistors that could transform the world of computation."

FLEET is an Australian Research Council-funded research centre bringing together over a hundred Australian and international experts to develop a new generation of ultra-low energy electronics, motivated by the need to reduce the energy consumed by computing.

Topological material switched off and on for the first time 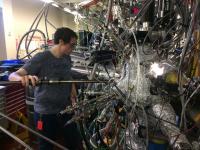