Genetic analyses have revealed remarkably higher species diversity in common red seaweed than previously assumed. It was thought that there were only five related species of the Gloiopeltis genus (known as 'funori' in Japanese) worldwide. However, genetic analyses of historic and modern specimens have revealed that there are over ten in Japan alone. The reinstatement of the species Gloiopeltis compressa (new Japanese name: Ryukyu-funori) was proposed by this research. It is found in Okinawa and has previously been confused with other species of Gloiopeltis.

These discoveries were made by an international research collaboration group consisting of the following members from Kobe University; Assistant Professor Takeaki Hanyuda, Professor Hiroshi Kawai (both of the Research Center for Inland Seas) and Kensho Yamamura (2nd year Masters in Biology at the Graduate School of Science).

The results of this research were published in the following journals; 'Phycologia' (October 14, 2019) and 'Phycological Research' (October 29, 2019).

Gloiopeltis is a genus of seaweed that is reddish brown to dark yellow in color. Called 'funori' in Japanese, it has been utilized to make glue and binding since ancient times. It is also used as an ingredient in miso soup.

Gloiopeltis furcata has the widest distribution range among Gloiopeltis species. It is found in the inter-tidal zones of temperate to cold water regions covering most of the northern Pacific Coasts. The research team genetically analyzed specimens of G. furcata collected from many habitats across its wide distribution. They revealed that there are 4 to 5 unnamed species that have previously been misclassified as G. furcata. These are easily confused with each other unless genetically analyzed.

Genetic analysis also suggested that some populations of G. furcata had previously been miscategorized as separate species. It was shown that Gloiopeltis minuta native to California and so called due to its small size, was in fact G. furcata. A 19th century sample from Kamchatka, Russia was classified as G. dura, however this species has not been reported since the name was introduced. Genetic analysis showed that this species was also synonymous with G. furcata.

The research group also genetically analyzed the type specimen of G. furcata taken from Sitka in Alaska in the 19thcentury. This specimen is currently housed at the V. L. Komarov Botanical Institute in St. Petersburg, Russia. Analyses revealed that this specimen was very close genetically to the specimens found in the Hokkaido and Tohoku areas of Japan. It was determined that they are conspecific- they belong to the same species. As G. furcata has been reported over a much wider range of Japan, it is thought that there are several different species south of Tohoku- more research is required to illuminate this.

Analyses of the Gloiopeltis complanata subgenus

Gloiopeltis complanata is distinguishable from G. furcata by its smaller size and greater number of branches.

To discover more about the G. complanata clade, genetic analyses were performed on historic and modern samples from the Okinawa region. This included 19th century specimens now held at Trinity College Herbarium in Ireland. These historical samples were taken by American botanist Charles Wright during the North Pacific Exploring Expedition of 1853-56.

The results confirmed that there is a separate species that was previously thought to be the same as G. complanata, which was very close genetically to a species which was described as Caulacanthus compressus in the 19th century. Therefore, this research group proposed the reinstatement of the species Gloiopeltis compressa (new Japanese name: Ryukyu-funori). It is mainly found in Okinawa (formerly the Ryukyu kingdom) and is characterized by its smaller size.

Discovery of an unconfirmed species in Japan

This research also revealed that a species previously found in Korea - Gloiopeltis frutex - also grows around Kyushu in southern Japan. Overall, this research has identified a new species, Ryukyu-funori (Gloiopeltis compressa), and has revealed that there is great variation in the Gloiopeltis genus in Japan and worldwide. Continuing research is hoped to illuminate this further. 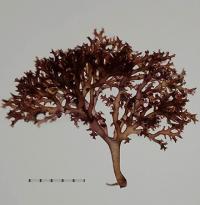 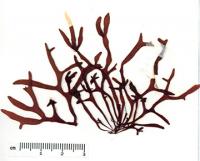