In manganese monosilicide (MnSi), microscopic magnetic vortices - skyrmions - may behave as "collectivists" or "individuals", i.e. they are able to create a single structure, or they can also split up individually. These are the findings of scientists from MIPT and Prokhorov General Physics Institute of RAS. Studying the behaviour of skyrmions will help to create unique quantum devices based on new physical principles.

Manganese monosilicide is a model object for spintronics - a branch of quantum electronics to study the possibility of controlling spin-polarized currents (conventional radio and electronic devices use non-polarized charge carriers). Spintronics-based devices, which use stable magnetic states as information bits, will help scientists to develop faster and more compact processors with low levels of power consumption, and fast and reliable non-volatile memory. This is why scientists are carefully studying the electronic and magnetic properties of materials with exotic magnetic structures.

Theorists are not yet able to fully explain the unusual magnetic properties of manganese monosilicide. For example, at very low temperatures (approximately -245C) the external magnetic field inside a manganese monosilicide crystal "rotates" the electron spins into a complex arrangement of tiny magnetic vortices, or skyrmions. The structure formed by the vortices resembles a honeycomb, with cells that are approximately 18 nanometres wide. According to theory, these structures - skyrmion lattices - can only be stable in two dimensions (in thin films); however skyrmion lattices are also observed experimentally in high quality single crystals of MnSi.

In order to use a skyrmion for practical purposes, scientists need to know whether the periodic magnetic structure consists of individual skyrmions (see image) that can be examined independently of one another, or forms a more complex magnetic structure which depends on the direction of the crystal and cannot be divided into separate vortices.

In a study published in Scientific Reports, which is part of the Nature Publishing Group, scientists from MIPT and GPI RAS succeeded in measuring the resistivity of solid manganese monosilicide to a very high degree of accuracy (~ 10-9 Ohm*cm) depending on the temperature and direction of the magnetic field. As noted by one of the authors of the paper, Prof. Vladimir Glushkov, "in magnetic metals, carrier scattering depends on the orientation of the magnetic structure in relation to the crystal lattice and it is normally strongly anisotropic. However, the connection between the magnetic and crystal structures may be lost if the moments in the vortex are rotated, due to their high number (a cross-section of a vortex has more than 200 magnetic moments) and their change in direction. Therefore, an experiment to measure the angular dependence of magnetic resistance allows us to obtain information on the anisotropy of the system, which is not possible in direct structural studies".

The experiment showed that in a certain range of temperatures and magnetic fields the resistivity of MnSi in a state with magnetic vortices, does not depend on the direction of the magnetic field, unlike other magnetic states (conical or uniformly magnetized). Furthermore, this region is surrounded by another skyrmion phase with significant anisotropy.

"Our experiment has revealed a clear distinction between the two different states of the skyrmion phase," said Prof. Sergey Demishev. "In simple terms, this experimental fact means that MnSi has two types of skyrmion lattices with a different physical nature. The area with isotropic resistance corresponds to the skyrmion lattice formed as a result of the condensation of individual magnetic vortices. The surrounding pocket which extends in the direction H||[001] is a complex anisotropic magnetic phase which is not able to break down into individual quasi-particles - skyrmions. Observations of a skyrmion lattice consisting of individual vortices confirm the profound analogy with type II superconductors, the mixed state of which is formed by Abrikosov-type vortices".

From a practical point of view, individual skyrmions can be used to transmit and store information and perform various logical operations. Magnetic vortices in existing specially prepared film structures - nanopillars, are significantly larger, and occur as a result of a specific mode of magnetic fluctuations in a limited area. Therefore, spintronics, which is based on the use of individual quasi-particles or skyrmions, will open up new prospects for miniaturizing devices and will reduce control currents. The only thing that physicists need to do now is to find materials similar to high-temperature superconductors, in which tiny magnetic vortices will be stable at room temperatures. 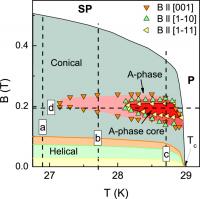