Chersonesos is an ancient city on the Crimean peninsula, which was founded by Greek colonists at the end of the 6th century BC in order to supply their homeland with grain and other strategic resources. The farmland in the Greek colonies was vital to the survival of the Greek city-states. The excavations by the Aarhus archaeologists are exploring the development of the rural area from its peak until its decline. One of the conclusions so far is that during a period of crisis in the early 3rd century BC a large proportion of the rural population was killed following a military invasion. The skeletons of these people can be found just 40 cm beneath the surface of the soil in a number of housing structures which the Aarhus archaeologists have excavated.

"We've learned things that have changed our view of what life was like in the Chersonesean countryside, which the Greeks called chora. The city's rural territory, particularly on the Herakleian and Tarkhankut peninsulas, is incredibly well preserved. The houses of the rural population dating back to about 300 BC lie dotted around the untouched landscape in the form of ruins that are still visible. For instance, in one of the excavated ruins we have found the remains of a whole family. So we're working on a murder scene dating back 2,300 years," reports project director Vladimir Stolba, an archaeologist from Aarhus University.

Chersonesos and its rural area have just been added to UNESCO's list of world heritage sites – the area is a unique example of the way the ancient Greek cities and surrounding landscape were organised.

"We've had several teams of students from Denmark and the host country Ukraine on our expeditions. It's been a great experience and very fruitful collaboration. We are in a lucky and, in a sense, unique situation to work on short-lived rural sites which have never been re-inhabited since their destruction in the early 3rd century BC. The picture that emerges from the excavations is a snapshot of daily activities of the ancient peasantry, of its life and dramatic death. We've found answers to many of our research questions: for instance, who cultivated the Greek grain fields, how densely the area was settled and how it was organised, and how the ancient population adapted to changes in cultural and natural environment. The answers have given rise to new questions that we want to explore next. The world heritage status will hopefully help to preserve this unique area despite the increase in tourism and tourism infrastructure development, enabling us to continue our work," concludes Vladimir Stolba.

The project is supported by The Danish Council for Independent Research 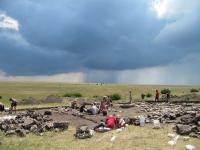