A new wearable ultrasound patch that non-invasively monitors blood pressure in arteries deep beneath the skin could help people detect cardiovascular problems earlier on and with greater precision. In tests, the patch performed as well as some clinical methods to measure blood pressure.

Applications include real-time, continuous monitoring of blood pressure changes in patients with heart or lung disease, as well as patients who are critically ill or undergoing surgery. The patch uses ultrasound, so it could potentially be used to non-invasively track other vital signs and physiological signals from places deep inside the body.

A team of researchers led by the University of California San Diego describe their work in a paper published Sept. 11 in Nature Biomedical Engineering.

"Wearable devices have so far been limited to sensing signals either on the surface of the skin or right beneath it. But this is like seeing just the tip of the iceberg," said Sheng Xu, a professor of nanoengineering at the UC San Diego Jacobs School of Engineering and the corresponding author of the study. "By integrating ultrasound technology into wearables, we can start to capture a whole lot of other signals, biological events and activities going on way below the surface in a non-invasive manner."

"We are adding a third dimension to the sensing range of wearable electronics," said Xu, who is also affiliated with the Center for Wearable Sensors at UC San Diego.

The new ultrasound patch can continuously monitor central blood pressure in major arteries as deep as four centimeters (more than one inch) below the skin.

Physicians involved with the study say the technology would be useful in various inpatient procedures.

"This has the potential to be a great addition to cardiovascular medicine," said Dr. Brady Huang, a co-author on the paper and radiologist at UC San Diego Health. "In the operating room, especially in complex cardiopulmonary procedures, accurate real-time assessment of central blood pressure is needed--this is where this device has the potential to supplant traditional methods."

A convenient alternative to clinical methods

Measuring central blood pressure isn't typically done in routine exams, however. The state-of-the-art clinical method is invasive, involving a catheter inserted into a blood vessel in a patient's arm, groin or neck and guiding it to the heart.

A non-invasive method exists, but it can't consistently produce accurate readings. It involves holding a pen-like probe, called a tonometer, on the skin directly above a major blood vessel. To get a good reading, the tonometer must be held steady, at just the right angle and with the right amount of pressure each time. But this can vary between tests and different technicians.

"It's highly operator-dependent. Even with the proper technique, if you move the tonometer tip just a millimeter off, the data get distorted. And if you push the tonometer down too hard, it'll put too much pressure on the vessel, which also affects the data," said co-first author Chonghe Wang, a nanoengineering graduate student at UC San Diego. Tonometers also require the patient to sit still--which makes continuous monitoring difficult--and are not sensitive enough to get good readings through fatty tissue.

The UC San Diego-led team has developed a convenient alternative--a soft, stretchy ultrasound patch that can be worn on the skin and provide accurate, precise readings of central blood pressure each time, even while the user is moving. And it can still get a good reading through fatty tissue.

The patch was tested on a male subject, who wore it on the forearm, wrist, neck and foot. Tests were performed both while the subject was stationary and during exercise. Recordings collected with the patch were more consistent and precise than recordings from a commercial tonometer. The patch recordings were also comparable to those collected with a traditional ultrasound probe.

"A major advance of this work is it transforms ultrasound technology into a wearable platform. This is important because now we can start to do continuous, non-invasive monitoring of major blood vessels deep underneath the skin, not just in shallow tissues," said Wang.

The patch is a thin sheet of silicone elastomer patterned with what's called an "island-bridge" structure--an array of small electronic parts (islands) that are each connected by spring-shaped wires (bridges). Each island contains electrodes and devices called piezoelectric transducers, which produce ultrasound waves when electricity passes through them. The bridges connecting them are made of thin, spring-like copper wires. The island-bridge structure allows the entire patch to conform to the skin and stretch, bend and twist without compromising electronic function.

The patch uses ultrasound waves to continuously record the diameter of a pulsing blood vessel located as deep as four centimeters below the skin. This information then gets translated into a waveform using customized software. Each peak, valley and notch in the waveform, as well as the overall shape of the waveform, represents a specific activity or event in the heart. These signals provide a lot of detailed information to doctors assessing a patient's cardiovascular health. They can be used to predict heart failure, determine if blood supply is fine, etc.

Researchers note that the patch still has a long way to go before it reaches the clinic. Improvements include integrating a power source, data processing units and wireless communication capability into the patch.

"Right now, these capabilities have to be delivered by wires from external devices. If we want to move this from benchtop to bedside, we need to put all these components on board," said Xu.

The team is looking to collaborate with experts in data processing and wireless technologies for the next phase of the project.

This project was supported by the National Institutes of Health (grant R21EB025521) and the Center for Wearable Sensors at UC San Diego. 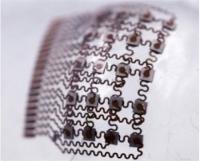