Warming streams could spell the end of spring-run Chinook salmon in California by the end of the century, according to a study by scientists at UC Davis, the Stockholm Environment Institute and the National Center for Atmospheric Research.

There are options for managing water resources to protect the salmon runs, although they would impact hydroelectric power generation, said Lisa Thompson, director of the Center for Aquatic Biology and Aquaculture at UC Davis. A paper describing the study is published online this week by the Journal of Water Resources Planning and Management.

"There are things that we can do so that we have the water we need and also have something left for the fish," Thompson said.

Working with Marisa Escobar and David Purkey at SEI's Davis office, Thompson and colleagues at UC Davis used a model of the Butte Creek watershed, taking into account the dams and hydropower installations along the river, combined with a model of the salmon population, to test the effect of different water management strategies on the fish. They fed in scenarios for climate change out to 2099 from models developed by David Yates at NCAR in Boulder, Colo.

In almost all scenarios, the fish died out because streams became too warm for adults to survive the summer to spawn in the fall.

The only option that preserved salmon populations, at least for a few decades, was to reduce diversions for hydropower generation at the warmest time of the year.

"If we leave the water in the stream at key times of the year, the stream stays cooler and fish can make it through to the fall," Thompson said.

Summer, of course, is also peak season for energy demand in California. But Thompson noted that it might be possible to generate more power upstream while holding water for salmon at other locations.

Hydropower is often part of renewable energy portfolios designed to reduce greenhouse gas emissions, Purkey said, but it can complicate efforts to adapt water management regimes to a warming world. Yet it need not be all-or-nothing, he said.

"The goal should be to identify regulatory regimes which meet ecosystem objectives with minimal impact on hydropower production," he said. "The kind of work we did in Butte Creek is essential to seeking these outcomes."

There are also other options that are yet to be fully tested, Thompson said, such as storing cold water upstream and dumping it into the river during a heat wave. That would both help fish and create a surge of hydropower.

Salmon are already under stress from multiple causes, including pollution, and introduced predators and competitors, Thompson said. Even if those problems were solved, temperature alone would finish off the salmon — but that problem can be fixed, she said.

"I swim with these fish, they're magnificent," Thompson said. "We don't want to give up on them."

Other co-authors of the paper are graduate student Christopher Mosser and Professor Peter Moyle, both at the Department of Wildlife, Fish and Conservation Biology, UC Davis. The study was funded by the U.S. Environmental Protection Agency.

Warming streams could be the end for salmon 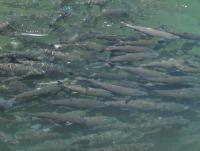