Climate changes associated with global warming can affect astronomical observations. That is the result of a study involving scientists from the University of Cologne. The international research team investigated a range of climate parameters at the Very Large Telescope (VLT) at the Paranal in the Atacama Desert in Chile, where the European Southern Observatory (ESO) operates its telescopes. Among other things, the team evaluated the data for temperature, wind speed and wind direction, and the water vapour content in the atmosphere over a period of several decades. This revealed an increase in temperatures above the world average and also increasing image blur due to air turbulence - so-called seeing.

The study 'The impact of climate change on astronomical observations' was published in the current issue of Nature Astronomy and can be viewed online. Its results are not only important for astronomers to adapt their observations to changing environmental conditions, but must also be taken into account when planning new large telescopes - such as the Extremely Large Telescope (ELT), which is currently being built near the Paranal.

The Cologne-based scientists Professor Dr Susanne Crewell and Christoph Böhm from the Institute of Geophysics and Meteorology were involved in the study. In the past, they had already explored various aspects of the past, present and future climate at the telescope's site in the framework of Collaborative Research Centre 1211 'Earth - Evolution at the Dry Limit'. The first author of the article is Faustine Cantalloube from the Max Planck Institute for Astronomy in Heidelberg.

The researchers investigated the extent to which climate change affects astronomy and in particular the quality of observations. The team focused on the Paranal Observatory in northern Chile because it has a whole range of environmental sensors that document local meteorological conditions. These measurements yielded one of the most comprehensive data sets over the last three decades at a largely untouched location.

Based on this data set, astronomers, climate researchers, atmosphere scientists, and meteorologists joined forces to identify important meteorological parameters that play a role in the quality of astronomical observations. The data allowed them to analyse long-term trends over a period of more than thirty years to determine the impact of climate change on future observations. Using four examples, they showed how climate change is already affecting, or might affect the operation of an astronomical observatory in future. The VLT, operated by ESO, was served as an example.

'The data showed a 1.5 ° C increase in near-ground temperature over the last four decades at the Paranal Observatory. This is slightly higher than the worldwide average of 1°C since the pre-industrial age,' said Susanne Crewell. Since the original telescope cooling system was not designed for such warm conditions, the quality of observations is increasingly endangered by more frequent turbulences - a consequence of the rise in temperature. The expected rise of 4° C (the most pessimistic scenario of the ICCP climate simulations) within the next century thus has to be taken into account in the construction of the 39-metre Extremely Large Telescope (ELT) at a nearby site.

In particular, astronomers face the challenge of a reduction in the so-called 'dome seeing', a reduction in resolution due to turbulence within the telescope dome. The researchers furthermore noticed an increase in turbulence in the air layer near the ground, making images blurred since cold and warm air layers with different refractive indices alternate more quickly. However, attributing this to climate change is difficult, since there were also constructional changes. The increase in wind shear in the upper troposphere in connection with the jet stream also leads to a so-called 'wind-driven halo'. This phenomenon appears when atmospheric turbulence conditions vary faster than the telescope's control system can correct them. This limits the contrast capabilities of the instrument and could potentially limit exoplanet studies. An increase in water vapour in the atmosphere moreover could lead to a reduction of the astronomical signal.

Through their unique perspective on the universe, astronomers know that the origin of life on Earth was a complex process made possible only by the coincidence of extremely rare circumstances. There is no second Earth in our neighbourhood. For this reason, the current issue of Nature Astronomy, published on September 10, is dedicated to the topic climate. The special issue aims to raise awareness in astronomy for climate aspects that are important for the work of astronomers.

On Site at the Very Large Telescope in Chile 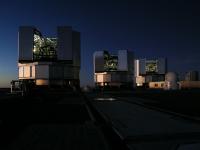 The Very Large Telescope in the Atacama Desert