Sweepers keep our pavements, paths and roads clean. For this purpose they are equipped with a powertrain for moving the vehicle, a blower for sucking up the dirt and debris and brushes for cleaning the ground. The energy for the operation of all the components is currently provided by a diesel engine; a sophisticated hydraulic distribution system guides the relevant share of the energy to the various components.

Such vehicles have long operating times of six to eight hours per day. With a consumption of more than five litres of diesel per hour, the annual consumption per vehicle amounts to around 10,000 litres. This is about ten times more than the typical consumption of a passenger car. A German study has estimated that the contribution of such working vehicles, e.g. road sweepers, municipal vehicles, dustbin lorries, etc., to the energy consumption of all road traffic is as high as 15 percent, despite the actual number of such vehicles being relatively small.

Natural gas and electricity instead of diesel and hydraulics

Bucher Municipal is based in Niederweningen in Switzerland and is the European market leader in compact sweeping vehicles. Empa and ETH Zürich carry out research on future powertrain technologies. As part of a project supported by CTI, Commission for Technology and Innovation, the partners have developed an innovative powertrain for road sweepers. The project goals were ambitious: the energy consumption compared with today's diesel vehicles was to be reduced by 45 percent and the total costs of the vehicle (purchase, interest, operating costs) were not allowed to exceed the costs of the current technology. To achieve this, the researchers and engineers have replaced today's conventional hydraulic power distribution with more efficient electric drive systems. Instead of a diesel engine with a hydraulic pump, a small gas engine with a power generator now acts as the drive source. In addition, a modern energy management system controls the interaction between the components.

The results are now available: compared to a conventional diesel-powered road sweeper, the electric hybrid sweeper driven by natural gas consumes less than half as much energy during the standard cycle for sweeping vehicles. Thanks to the lower carbon content in natural gas, the CO2 emissions have decreased by as much as 60 percent, and with biogas blending this effect is even higher. The significantly lower consumption, in combination with lower fuel prices for natural gas, result in a significant reduction in operating costs, which more than compensates for the higher initial purchasing cost.

Implementation project in the pipeline

The hybrid drive system has a modular design. This means that a petrol, liquefied petroleum gas or diesel engine could be installed instead of a natural gas engine. If a hydrogen-powered fuel cell or a significantly larger battery is used instead of an internal combustion engine with power generator, purely electrical operation would also be possible. This modular drive concept will allow Bucher Municipal to cater for a wide range of different customer needs in the future.

The management of Bucher Municipal is therefore planning to further develop the electric hybrid drive's modular platform and has already launched an internal concept study to this end. In this context, further work on reducing costs, optimising operation and packaging must be carried out in the areas of the power battery, the onboard power generator and the overall vehicle. In parallel to this, the production processes in Niederweningen will be analysed with regard to vehicle electrification. The aim is to bring an innovative sweeping machine onto the market in the foreseeable future.

Funder
Commission for Technology and Innovation of Switzerland 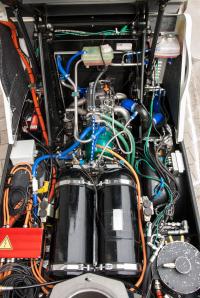