A fossil lower jaw found in the Ledi-Geraru research area, Afar Regional State, Ethiopia, pushes back evidence for the human genus -- Homo -- to 2.8 million years ago, according to a pair of reports published March 4 in the online version of the journal Science. The jaw predates the previously known fossils of the Homo lineage by approximately 400,000 years. It was discovered in 2013 by an international team led by Arizona State University scientists Kaye E. Reed, Christopher J. Campisano and J Ramón Arrowsmith, and Brian A. Villmoare of the University of Nevada, Las Vegas.

For decades, scientists have been searching for African fossils documenting the earliest phases of the Homo lineage, but specimens recovered from the critical time interval between 3 and 2.5 million years ago have been frustratingly few and often poorly preserved. As a result, there has been little agreement on the time of origin of the lineage that ultimately gave rise to modern humans. At 2.8 million years, the new Ledi-Geraru fossil provides clues to changes in the jaw and teeth in Homo only 200,000 years after the last known occurrence of Australopithecus afarensis ("Lucy") from the nearby Ethiopian site of Hadar.

Found by team member and ASU graduate student Chalachew Seyoum, the Ledi-Geraru fossil preserves the left side of the lower jaw, or mandible, along with five teeth. The fossil analysis, led by Villmoare and William H. Kimbel, director of ASU's Institute of Human Origins, revealed advanced features, for example, slim molars, symmetrical premolars and an evenly proportioned jaw, that distinguish early species on the Homo lineage, such as Homo habilis at 2 million years ago, from the more apelike early Australopithecus. But the primitive, sloping chin links the Ledi-Geraru jaw to a Lucy-like ancestor.

"In spite of a lot of searching, fossils on the Homo lineage older than 2 million years ago are very rare," says Villmoare. "To have a glimpse of the very earliest phase of our lineage's evolution is particularly exciting."

In a report in the journal Nature, Fred Spoor and colleagues present a new reconstruction of the deformed mandible belonging to the 1.8 million-year-old iconic type-specimen of Homo habilis ("Handy Man") from Olduvai Gorge, Tanzania. The reconstruction presents an unexpectedly primitive portrait of the H. habilis jaw and makes a good link back to the Ledi fossil.

"The Ledi jaw helps narrow the evolutionary gap between Australopithecus and early Homo," says Kimbel. "It's an excellent case of a transitional fossil in a critical time period in human evolution."

Global climate change that led to increased African aridity after about 2.8 million years ago is often hypothesized to have stimulated species appearances and extinctions, including the origin of Homo. In the companion paper on the geological and environmental contexts of the Ledi-Geraru jaw, Erin N. DiMaggio, of Pennsylvania State University, and colleagues found the fossil mammal assemblage contemporary with this jaw to be dominated by species that lived in more open habitats--grasslands and low shrubs--than those common at older Australopithecus-bearing sites, such as Hadar, where Lucy's species is found.

"We can see the 2.8 million year aridity signal in the Ledi-Geraru faunal community," says research team co-leader Kaye Reed, "but it's still too soon to say that this means climate change is responsible for the origin of Homo. We need a larger sample of hominin fossils, and that's why we continue to come to the Ledi-Geraru area to search."

The research team, which began conducting field work at Ledi-Geraru in 2002, includes:

The Ledi-Geraru Research Project is based in the Institute of Human Origins (IHO) at Arizona State University. IHO is one of the preeminent research organizations in the world devoted to the science of human origins. A research center of the College of Liberal Arts and Sciences, IHO pursues an integrative strategy for research and discovery central to its over 30-year-old founding mission, bridging social, earth, and life science approaches to the most important questions concerning the course, causes, and timing of events in the human career over deep time. IHO fosters public awareness of human origins and its relevance to contemporary society through innovative outreach programs that create timely, accurate information for both education and lay communities. 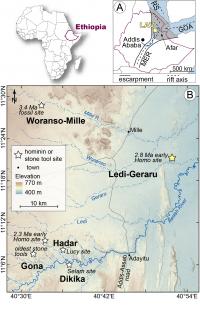