Discoveries about tropical coral reefs, to be published on 23 June 2010, are expected to be invaluable in efforts to restore the corals, which are succumbing to bleaching and other diseases at an unprecedented rate as ocean temperatures rise worldwide. The research gives new insights into how the scientists can help to preserve or restore the coral reefs that protect coastlines, foster tourism, and nurture many species of fish. The research, which will be published in the journal PLoS One, was accomplished by an international team whose leaders include Iliana Baums, an assistant professor of biology at Penn State University.

The team focused on one of the most abundant reef-building species in the Caribbean, Montastraea faveolata, known as the mountainous star coral. Though widespread, this species is listed as endangered on the Red List of the International Union for the Conservation of Nature because its numbers have declined significantly -- in recent years, up to 90 percent of the population has been lost in some areas.

Discovering how corals respond to ocean warming is complicated because corals serve as hosts to algae. The algae live in the coral and feed on its nitrogen wastes. Through photosynthesis, the algae then produce the carbohydrates that feed the coral. When this complex and delicate symbiosis is upset by a rise in ocean temperature, the coral may expel the algae in a phenomenon known as coral bleaching, which may cause the death of both algae and coral. The challenge is to figure out why some corals cope with the heat stress better than others.

"We decided to focus on coral larvae because the successful dispersal and settlement of larvae is key to the survival of reefs," explains Baums. "Also, since free-swimming larvae do not yet have symbiotic algae, we can record the expression of different genes in our samples and know that we are looking at the molecular response of the coral itself to heat stress."

Star coral broadcasts eggs and sperm into the water column in mass spawning events, which occur in the Caribbean a few days after the full moon in August. Fertilization occurs quickly when the larvae reach the surface, and then they drift for as much as two weeks before settling on the hard surfaces where they will spend the rest of their lives. Free-swimming larvae are especially vulnerable to ecological changes because they have limited energetic reserves. Scientifically, studying coral larvae has distinct advantages over documenting the response of adult coral to thermal stress.

Logistically, however, studying larvae scientifically is not so easy. "We have to find suitable reefs with known, and therefore roughly predictable, spawning habits," explains Baums. "These reefs have to be close enough to shore that we can get into the water and out to the corals within the first hour of spawning, which always happens at night. When we see that the corals are about to spawn, we set up nets over coral colonies to catch the fragile gametes before they can reach the surface, then we rush back to shore to set up controlled matings and get the young corals back into aquarium tanks before they die." Once spawning started, the scientists worked nearly around the clock for a few days. If they failed to capture enough larvae, or if the larvae died in captivity, the experiment could not be repeated until the following year.

The team successfully collected spawn from two populations of mountainous star coral, one off Key Largo, Florida, and one off Puerto Morales, Mexico. Keeping spawn from the two sites separate, the scientists allowed fertilization to occur in captivity, then they raised the embryos at different temperatures. They recorded the developmental stage and gene expression in the embryos between 12 and 48-to-50.5 hours after fertilization, comparing those embryos raised at normal temperatures with those raised at temperatures that were 1-to-2 degrees Centigrade higher.

In addition to examining the physical appearance of embryos as they developed, the team extracted RNA from approximately 1,500 embryos from each location to see how much of each of 1,300 molecular products were being transcribed at a given time. Genes that were transcribed in different amounts between high-temperature and normal-temperature samples were called deferentially expressed genes. Twenty-four hours after fertilization, embryos from the same site showed similar gene expression profiles regardless of the temperature at which they were raised. As the time since fertilization increased, the samples showed more and more deferentially expressed genes, 458 in all. Of the 218 deferentially expressed genes that were sensitive to temperature, almost none were shared between the two locations on the first day of sampling, but by the second day, roughly 25 percent were shared between samples from Mexico and Florida. By 48 hours, thermal stress -- not sampling location -- became the dominant factor influencing gene expression. At that point, the gene expression of coral subjected to similar temperatures clustered together regardless of their place of origin.

The team then classified the deferentially expressed genes into functional groups and found that the genes most sensitive to temperature changes were primarily those involved in cell proliferation, growth, and development. The genes that varied according to location of origin were most often involved in cell adhesion, protein degradation, and protein biosynthesis.

"Our study shows that the response of larvae to changing conditions depends upon where the parent colonies lived," says Baums. "Clearly the coral larvae from Mexico and Florida respond differently to heat stress, even though they belong to the same species, showing adaptations to local conditions. The two populations have different adaptive potential."

Baums said she is excited by the clear evidence of local adaptations in populations that this study documented. Previous work by Baums and her colleagues has included experiments in restoring damaged coral reefs by creating larvae from controlled genetic crosses, growing them in captivity until they settle onto ceramic tiles, and then transplanting them into selected areas to replenish damaged reefs. Some crosses survive in higher-temperature water better than others, some survive in captivity better than others, and some settle more reliably onto the prepared tiles that are used to form or restore colonies. The new information from the current study will be invaluable in restoration work.

"Variation among populations in gene expression offers the species as a whole a better chance of survival under changing conditions," Baums said. "We might be able to screen adult populations for their ability to produce heat-resistant larvae and focus our conservation efforts on those reefs."

IMAGES
High-resolution images related to this story are on the Web at: http://www.science.psu.edu/news-and-events/2010-news/Baums6-2010 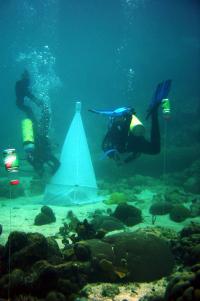 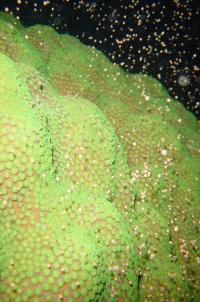