The intertidal mudflats of Barr Al Hikman, a nature reserve at the south-east coast of the Sultanate Oman, are crucial nursery grounds for numerous crab species. In return, these crabs are a vital element of the ecology, as well as the regional economy, a new publication in the scientific journal Hydrobiologia shows. 'These important functions of the crabs should be considered when looking at the increasing human pressure on this nature reserve', first author and NIOZ-researcher Roeland Bom says.

The counts of Bom and his colleagues show, that there are millions and millions of these crabs in Barr Al Hikman. They are food to hundreds of thousands of birds, both migrating species, as well as birds breeding in the area, such as crab plovers. The crabs live in holes in the ground. They forage on the seagrass beds that are still abundant in Barr Al Hikman. 'Apart from the high primary production (algae) in Barr al Hikman, this reserve is also well suited for crabs because of the vastness of the area', Bom assumes. 'The slopes of the mudflats are very gentle, so at low tide, the crabs have an immense area at their disposition.'

The value of the crabs is not just ecological, Bom stresses. "Local fishermen that catch the blue swimming crabs, distribute them not only through Oman, but also through the rest of the Arabian Peninsula and even to Japan. At approximately € 2,- per kilo, these crabs represent an important economic pillar, both under the region around Barr Al Hikman, as well as for the whole of Oman.'

The protection of the reserve of Barr Al Hikman is limited to national legislation. Efforts to acknowledge this reserve under the international Ramsar-convention were never effectuated. There is, however, increasing human pressure on the mudflats of Barr Al Hikman, the authors describe, that would justify further protection. For example, there are well-developed plans to start shrimp farming around this intertidal area. 'When looking at the cost and benefits of these activities, it is important to look at the role of this reserve in the local ecology, as well as in the broader ecology of the many migratory birds that use the area', Bom says. 'Moreover, our research shows that the unique ecosystem of Barr Al Hikman plays a key role in the economy as well.'

Crabs are key to ecology and economy in Oman 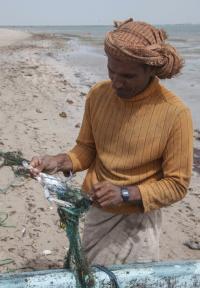