A study examines how captive breeding influences monarch butterfly migration. Butterfly enthusiasts buy monarch butterflies from commercial breeders for special events and later release the butterflies in hopes that they will fly south to their Mexican overwintering grounds. However, the impacts of captive breeding of monarch butterflies are unclear. Ayse Tenger-Trolander and colleagues compared behavioral, morphological, and physiological traits among descendants of commercially bred and wild-caught monarchs in Chicago. To measure orientation behavior, the authors tested monarchs that emerged in autumn in a flight simulator. Although the commercial and wild monarchs were raised side by side, only the wild monarchs flew south. The forewing shape of commercial monarchs was smaller and rounder than those of wild monarchs. However, the number of mature eggs decreased in both groups in autumn, indicating a decoupling of reproductive arrest and behavior. In addition to the release of commercial monarchs, monarch hobbyists rear wild-caught monarchs indoors for eventual release. To determine whether indoor captive rearing effectively induces migratory behavior, the offspring of wild monarchs were reared in indoor chambers mimicking autumn and summer conditions. Compared with butterflies reared outdoors, monarchs reared in chambers with autumn-like conditions did not orient south and had higher egg counts. According to the authors, captive breeding may adversely affect the ability of monarchs to migrate successfully.

Migration of butterflies bred in captivity 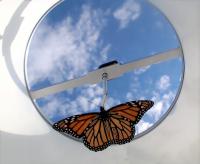