Scientists at the Department of Infection and Immunity of the Luxembourg Institute of Health (LIH) revealed a novel mechanism through which the immune system can control autoimmunity and cancer. In the special focus of the researchers were regulatory T cells - a specific type of white blood cells that in general act as a brake on the immune system. The LIH research team led by Prof Dirk Brenner, FNR ATTRACT fellow and Head of Experimental & Molecular Immunology, revealed a mechanism that controls the function of regulatory T cells and determines the balance between autoimmunity and anti-cancer activity. In a preclinical model, the scientists further showed that the elucidation of the metabolic mechanism of a disease can lead to disease reduction by a rationally-designed diet that specifically addresses these metabolic alterations. This sets a new direction for future treatment of metabolic diseases. These findings, which were published today in the leading international journal Cell Metabolism, hold important implications for the development of personalised treatment options for autoimmune disorders and cancer.

"Our immune system is needed for a healthy body function and protects us from all kinds of infections. Particularly important in this respect are T cells, and specifically regulatory T cells. Although these represent only a small fraction of all T cells, they are crucial to keep our immune system in check" explains Prof Brenner. "If regulatory T cells are not functional, the immune system gets out of control and turns against its own body. This can lead to detrimental autoimmune diseases like multiple sclerosis, type I diabetes or arthritis. However, a highly reactive immune system can kill cancer cells very efficiently. This has led to the development of 'checkpoint inhibitors', specific drugs that unleash an immune system attack on cancer cells and which won the Nobel Prize in Medicine in 2018". The Luxembourgish scientists took this angle and revealed a novel mechanism by which this balance between an extreme or subdued immune reaction can be controlled by modifying regulatory T cell metabolism.

Initially, the researchers focused on how regulatory T cells cope with stress. Cellular stress can originate from the cells themselves, for example when they get activated and divide, but also from their environment, especially from nearby tumour cells. Free radicals called reactive oxygen species (ROS) are the molecular mediators of cellular stress. These are harmful for the cells and therefore need to be inactivated. "Free oxygen radicals are 'neutralised' by antioxidants and the major antioxidant in T cells is a molecule known as glutathione. We were surprised when we realised that regulatory T cells had about three times as much glutathione as other T cells. This pointed to an important function", says Henry Kurniawan, first author of the study and PhD student in Prof Brenner's group. Through a sophisticated genetic approach, the scientists removed a gene named 'glutamate cysteine ligase' (Gclc) only in a small population of regulatory T cells in mice. The Gclc gene is instrumental for glutathione production. Prof Brenner's team discovered that free radicals accumulated in these genetically altered regulatory T cells and that these cells lost their ability to act as a brake on the immune system. Strikingly, this led to a massive immune activation and a fatal autoimmune disease.

The team also found that the absence of glutathione in regulatory T cells increased serine metabolism massively. Serine is one of the 22 different amino acids that constitute the building blocks of proteins, which are in turn important for the structure and function of cells. No previous research group had studied the connection between glutathione, free radicals, serine and regulatory T cell function before. Prof Brenner's team characterised the metabolic alteration that led to the observed autoimmune disease in their mutant mice. Based on their findings, they designed a specific nutritional plan with the aim of correcting these disease-causing metabolic shifts. This dietary plan lacked both the amino acids serine and the closely related glycine. Interestingly, this engineered precision diet suppressed the severe autoimmunity and no disease developed. "Importantly, our study shows that the absence of only 2 out of 22 amino acids can cure a complex autoimmune disease. Therefore, elucidating the exact metabolic and molecular basis of a disease offers the possibility to correct these metabolic abnormalities through a special diet that is precisely adapted to the delineated disease mechanism. Our study might be a first step in the direction of the personalised treatment of metabolic diseases and autoimmunity", explains Prof Brenner.

"The relationship between glutathione, free radicals and serine can be used as a 'switch' to modulate immune cell activation. A higher immune cell activity is beneficial for cancer patients. We were intrigued by the idea of using our findings also to boost anti-tumor responses" he adds. Indeed, the team further showed that lower glutathione levels in regulatory T cells and the resulting rise in immune cell activation led to a significant tumour rejection, which might open up new therapeutic avenues for cancer treatment. "These astonishing results show the enormous potential of tweaking metabolism to prevent autoimmunity and target cancer. This could pave the way for the development of a new generation of immunotherapies," explains Prof Markus Ollert, Director of LIH's Department of Infection and Immunity. "The publication of these results in such a competitive and prestigious international journal is a momentous accomplishment not just for our department and institute, but for the entire Luxembourgish biomedical research community", he concludes.

In future projects, the researchers will use their findings to elaborate new approaches for therapeutic intervention. In that respect, the scientists have already proven that their delineated disease-controlling mechanism is also relevant in human regulatory T cells.

Due to its significance, the publication was selected by Cell Metabolism to be featured as the cover story of the May issue of the journal.

Prof Dirk Brenner is the Deputy Head of Research & Strategy at LIH's Department of Infection and Immunity. He is Professor for Immunology & Genetics at the Luxembourg Center for Systems Biomedicine (LCSB) of the University of Luxembourg and Professor of Allergology at the University of Southern Denmark. He received a prestigious ATTRACT Consolidator grant from the Luxembourg National Research Fund (FNR), in 2015 to set up the Experimental & Molecular Immunology research group at LIH. The FNR-ATTRACT programme supports the national research institutions by expanding their competences in strategic research areas by attracting outstanding young researchers with high potential to Luxembourg.

The Luxembourg Institute of Health (LIH) is a public research organization at the forefront of biomedical sciences. With its strong expertise in population health, oncology, infection and immunity as well as storage and handling of biological samples, its research activities impact on people's health. At LIH, devoted scientists investigate disease mechanisms to develop new diagnostics, innovative therapies and effective tools to implement personalized medicine. The institution is the first supplier of public health information in Luxembourg, a strong cooperation partner in local and international projects and an attractive training place for ambitious early-stage researchers.

LIH's Department of Infection and Immunity is a basic clinical-translational research entity aiming at understanding the complex mechanisms of infectious and inflammatory disease processes to enable new ways to diagnose, prevent and cure human diseases. Building on a highly interdisciplinary research environment, the research strategy of the Department of Infection and Immunity focuses on experimental discovery and validation, bridging to clinical application and technology development to address major unsolved medical needs in the areas of immune-mediated inflammation (such as in allergy, asthma, autoimmunity), cancer and infectious diseases (AIDS, measles and rubella virus infection, amongst others). 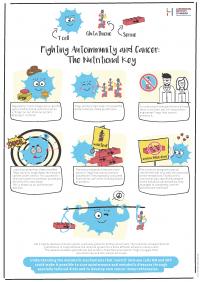