GAINESVILLE, Fla. --- Researchers picking through the contents of fossil clams from a Sarasota County quarry found dozens of tiny glass beads, likely the calling cards of an ancient meteorite.

Analysis of the beads suggests they are microtektites, particles that form when the explosive impact of an extraterrestrial object sends molten debris hurtling into the atmosphere where it cools and recrystallizes before falling back to Earth.

They are the first documented microtektites in Florida and possibly the first to be recovered from fossil shells.

Mike Meyer was a University of South Florida undergraduate when he discovered the microtektites during a 2006 summer fieldwork project led by Roger Portell, invertebrate paleontology collections director at the Florida Museum of Natural History.

As part of the project, students systematically collected fossils from the shell-packed walls of a quarry that offered a cross-section of the last few million years of Florida's geological history. They pried open fossil clams, washing the sediment trapped inside through very fine sieves. Meyer was looking for other tiny objects - the shells of single-celled organisms known as benthic foraminifera - when he noticed the translucent glassy balls, smaller than grains of salt.

"They really stood out," said Meyer, now an assistant professor of Earth systems science at Harrisburg University in Pennsylvania. "Sand grains are kind of lumpy, potato-shaped things. But I kept finding these tiny, perfect spheres."

After the fieldwork ended, his curiosity about the spheres persisted. But his emails to various researchers came up short: No one knew what they were. Meyer kept the spheres - 83 in total - in a small box for more than a decade.

"It wasn't until a couple years ago that I had some free time," he said. "I was like, 'Let me just start from scratch.'"

Meyer analyzed the elemental makeup and physical features of the spheres and compared them to microtektites, volcanic rock and byproducts of industrial processes, such as coal ash. His findings pointed to an extraterrestrial origin.

He thinks the microtektites are the products of one or more small, previously unknown meteorite impacts, potentially on or near the Florida Platform, the plateau that undergirds the Florida Peninsula.

Initial results from an unpublished test suggest the spheres have traces of exotic metals, further evidence they are microtektites, Meyer said.

Most of them had been sealed inside fossil Mercenaria campechiensis or southern quahogs. Portell said that as clams die, fine sediment and particles wash inside. As more sediment settles on top of the clams over time, they close, becoming excellent long-term storage containers.

"Inside clams like these we can find whole crabs, sometimes fish skeletons," Portell said. "It's a nice way of preserving specimens."

During the 2006 fieldwork, the students recovered microtektites from four different depths in the quarry, which is "a little weird," Meyer said, since each layer represents a distinct period of time.

"It could be that they're from a single tektite bed that got washed out over millennia or it could be evidence for numerous impacts out on the Florida Platform that we just don't know about," he said.

The researchers plan to date the microtektites, but Portell's working guess is that they are "somewhere around 2 to 3 million years old."

One oddity is that they contain high amounts of sodium, a feature that sets them apart from other impact debris. Salt is highly volatile and generally boils off if thrust into the atmosphere at high speed, Meyer said.

"This high sodium content is intriguing because it suggests a very close location for the impact," Meyer said. "Or at the very least, whatever impact created it likely hit a very large reserve of rock salt or the ocean. A lot of those indicators point to something close to Florida."

Meyer and Portell suspect there are far more microtektites awaiting discovery in Florida and have asked amateur fossil collectors to keep an eye out for the tiny spheres.

But no one will be recovering microtektites from the original quarry any time soon. It's now part of a housing development.

"Such is the nature of Florida," Meyer said. 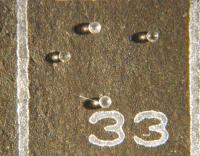 Glass Spheres Are Smaller Than Grains of Salt