SINGAPORE, 15 January 2020 - A key mechanism underlying neuronal dysfunction in Angelman syndrome (AS), a syndromic form of autism spectrum disorder, has - for the first time - been revealed through innovative research led by Duke-NUS Medical School and the National Neuroscience Institute (NNI) under the National Neuroscience Research Institute Singapore (NNRIS) - a joint venture combining neuroscience research expertise from both organisations. The finding may bring researchers closer to developing treatment options for this rare genetic condition which occurs in about 1 in 15,000 live births in Singapore.

Using human induced neurons, the team discovered that one specific ion channel which allows potassium to pass through cells was misregulated in neurons from AS patients' cells. This change, which was caused by a missing gene, seems to be responsible for frequent seizures in AS patients. Hence, suppressing the specific ion channel activity could ultimately resolve seizures experienced by AS patients. As the missing gene is common to other forms of autism, the same mechanism may be responsible for the broader range of symptoms seen in autism and finding a treatment for it could potentially benefit people with autism in general.

In Singapore, one in 150 children has autism, a developmental disorder that affects communication and behaviour - higher than the global average of one in 160 children. Unfortunately, there is currently no one standard treatment for autism, partly because its underlying cause and mechanism has so far remained unknown.

AS patients require life-long care as they live with developmental delay, lack of speech and frequent seizures. AS and autism share a common genetic basis, specifically, a disruption in the number of copies of the Ubiquitin Protein Ligase E3A (UBE3A) gene. Because of this, many researchers believe that identifying the mechanism underlying AS can lead to therapeutic options for disorders with similar symptoms, such as seizures and learning disability. However, existing studies using mouse models - currently the go-to experimental models for biomedical research on AS - have not fully addressed the underlying mechanism of network hyperactivity leading to epileptic seizures observed in AS. Furthermore, it is unclear whether similar pathological mechanisms operate in human AS cases.

"Findings from mouse models of AS have been hard to translate into human trials because of key differences between human and mouse neurons, resulting in an inability to identify a clear mechanism that can lead to effective therapeutics," explained Associate Professor Hyunsoo Shawn Je, from Duke-NUS' Neuroscience and Behavioural Disorders Programme, senior author of the study.

To date, the few studies that have used human neurons derived from AS patient-induced pluripotent stem cells (iPSCs) were unable to sufficiently explain the epileptic network activity observed in AS patients. A key concern regarding these studies is that the limited functional maturation of human neurons grown in long-term cultures may affect the modelling of true disease phenotypes in human patients.

The research team from Duke-NUS and NNI, together with collaborators from the Genome Institute of Singapore (GIS), the Singapore Bioimaging Consortium (SBIC), the Agency for Science, Technology and Research (A*STAR), the National University of Singapore (NUS), and Duke University therefore focused on studying the functional changes of human neurons induced from AS patient-derived iPSCs at both the individual cell and the network ensemble levels with the use of functionally mature two-dimensional (2D) human neuronal cultures as well as three-dimensional (3D) human cortical organoids, or mini brains.

"Our study used 2D human neuronal cultures that enabled the accelerated discovery of functional differences at the individual cell level in the brains of normal individuals versus those with AS," Assoc Prof Je clarified. "The use of 3D human mini brains then allowed us to monitor spontaneous network activities, connecting the findings of abnormal firing by single neurons and seizure-like activities just like the ones observed in AS patient brains."

"We found that dysfunction of a specific molecule, known as the large conductance calcium-activated potassium (BK) channel, was misregulated in neurons derived from AS patients' cells, and this change seems to be responsible for frequent seizures in AS patients," Dr Alfred Sun, Junior Principal Investigator at NNI and co-first author of the study, elaborated.

"The integrative data analysis obtained from functionally mature 2D neurons and 3D organoids using a combination of genetic, biochemical, electrophysiological, and imaging assays represents an advanced platform for investigating neuronal phenotypes in vitro. This approach may be applicable to disease modelling studies performed in other tissues or organs," Dr Qiang Yuan, co-first author from Duke-NUS, highlighted.

"Novel approaches such as those used in this study have the potential to unlock new avenues of discovery where conventional methods have fallen short," commented Professor Patrick Casey, Senior Vice Dean for Research at Duke-NUS. "This fascinating study not only identified a plausible drug target to treat epilepsy in AS patients, but also suggests a paradigm change in designing experimental methodology to tackle human brain disorders."

"AS patients have to live and cope with the frequent bouts of seizures - every day is an uphill battle for not only the patients but their families as well. This research exemplifies the active collaborations and leverages on the different expertise within the NNRIS. The team has broken new ground with these discoveries and it is important that we continue to pursue science for better treatment options so that our patients can lead happier and healthier lives," said Professor Tan Eng King, Director, Research and Senior Consultant, Department of Neurology at NNI.

Following on from this study, the researchers are next developing a high-throughput drug-screening platform using human induced neurons to screen US Food and Drug Administration approved drugs that can potentially be repurposed for treatment of epilepsy in AS patients. 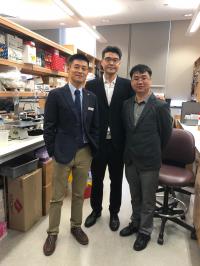 Lead Researchers from Duke-NUS and NNI