On April 8 at 0141 UTC (April 7 at 9:41 p.m. EDT) NASA's Aqua satellite analyzed the storm using the Atmospheric Infrared Sounder or AIRS instrument when it was major hurricane. AIRS found coldest cloud top temperatures as cold as or colder than minus 80 degrees Fahrenheit (minus 62.2 Celsius).  NASA research has shown that cloud top temperatures that cold indicate strong storms that have the capability to create heavy rain.

Harold's path of heavy rain from April 2 to 9 was calculated and mapped in an animation created at NASA's Goddard Space Flight Center in Greenbelt, Maryland.

The animation shows the heavy precipitation associated with Tropical Cyclone Harold as it progresses from the Solomon Islands on April 2, 2020 to its movement beyond the island of Tonga on April 8. Harold's core region produced precipitation rates in excess of 30 millimeters per hour, which is equivalent to a 7-inch-deep rain accumulation if the core region were to remain over a given location for 6 hours. The precipitation estimates in this animation come from the IMERG multi-satellite algorithm developed by NASA and run in near real-time.

The precipitation estimates in this animation come from the IMERG multi-satellite algorithm developed by NASA and run in near real-time.

At 10 a.m. EDT (1500 UTC), JTWC's final warning on Harold noted that the system had  weakened to the strength of a Category 1 hurricane on the Saffir-Simpson Hurricane Wind scale with maximum sustained winds near 80 knots (92 mph/148 kph). Harold was located near latitude 26.7 degrees south and longitude 166.1 degrees west, approximately 426 nautical miles south-southeast of Niue and has tracked east southeastward at 30 knots (35 mph/56 kph).

On April 9, infrared imagery, from the AIRS instrument aboard NASA's Aqua satellite, revealed that strong, persistent northwesterly vertical wind shear continues to displace the bulk of central convection and thunderstorms to the south and southeast of Harold's center. 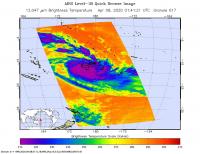