WASHINGTON, D.C. – Karl A. Gschneidner Jr., a senior metallurgist at the U.S. Department of Energy's Ames Laboratory, today cautioned members of a Congressional panel that "rare-earth research in the USA on mineral extraction, rare-earth separation, processing of the oxides into metallic alloys and other useful forms, substitution, and recycling is virtually zero."

Rare-earth elements are critical components in the great majority of America's high-tech commercial and military products. Their vital role in our nation's economic and national security was underscored by today's hearing of the Investigations & Oversight Subcommittee of the House Committee on Science and Technology, which was devoted entirely to the topic.

To optimize the use of rare earths in current and future products, scientists combine rare earths with other elements to create alloys intended for specific purposes. Yet the United States and other nations have ceded much of this alloying knowledge to China, Gschneidner said.

During the hearing, Gschneidner, an acknowledged leader in the field, demonstrated the benefits that added expertise in rare-earth alloying would bring the nation by holding up a neodymium-iron-boron permanent magnet, which he and his colleagues, including Rick Schmidt, principal scientist emeritus, recently created at the Ames Laboratory, using a revolutionary new process that was also developed at the Lab.

However, current methods used to manufacture the magnets produce hazardous byproducts. In contrast, the Ames Lab process eliminates production of these byproducts. Also significant, the Ames Laboratory process has the potential to enable the United States to produce neodymium-iron-boron magnets less expensively.

Global sales of neodymium-iron-boron magnet products total $4.1 billion. Such magnets include the rare-earth element, neodymium, and they can be found in a wide array of electronic and electrical components.

Cheaper, greener magnets hint at other advanced technologies, such as improved batteries and magnetic refrigeration, that could result from increased research into rare-earth materials.

Gschneidner, who was honored by Congress in 2007 in advance of his receiving the Acta Materialia Gold Medal, the top international award in the field of materials science, is perhaps best known for advancing another rare-earth dependent technology, magnetic refrigeration.

Though little known outside of research circles, rare-earth magnetic alloys can be used to manufacture highly efficient and green cooling devices that Gschneidner and others believe could reduce the nation's energy consumption by 5 percent, if universally adopted.

"Europe and China are moving rapidly in this area," Gschneidner told panel members, "the USA needs to put together a strong, cohesive effort to retain our disappearing leadership in this technology."

Game-changing breakthroughs in magnetic refrigeration technology that, in turn, have allowed other nations to aggressively develop it, were in large part the result of efforts by Gschneidner and his team of Ames Laboratory researchers who succeeded in creating new alloys of the rare-earth element gadolinium.

NOTE TO EDITORS: Scientists use the term rare-earth elements to describe 17 elements, including: scandium and yttrium, plus the 15 so-called lanthanides. The latter group appears as element numbers 57-71 on the periodic table. 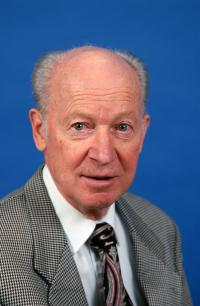