WOODS HOLE, Mass. -- Octopuses have the most flexible appendages known in nature, according to a new study in Scientific Reports. In addition to being soft and strong, each of the animal's eight arms can bend, twist, elongate and shorten in many combinations to produce diverse movements. But to what extent can they do so, and is each arm equally capable? Researchers at the Marine Biological Laboratory (MBL) filmed 10 octopuses over many months while presenting them with a variety of challenges, and recorded 16,563 examples of these arm movements.

Amazingly, all eight arms could perform all four types of deformation (bend, twist, elongate, shorten) throughout their length. Moreover, each type of movement could be deployed in multiple orientations (e.g. left, right, up, down, 360º, etc.). Especially noteworthy was the clockwise and counterclockwise twisting that could occur throughout each arm during bending, shortening or elongating. This twisty strong arm is exceptionally flexible by any standard.

"Even our research team, which is very familiar with octopuses, was surprised by the extreme versatility of each of the eight arms as we analyzed the videos frame-by-frame," said co-author and MBL Senior Scientist Roger Hanlon. "These detailed analyses can help guide the next step of determining neural control and coordination of octopus arms, and may uncover design principles that can inspire the creation of next-generation soft robots."

Engineers have long wished to design "soft robotic arms" with greater agility, strength and sensing capability. Currently, most robotic arms require hard materials and joints of many configurations, all of which have limitations. The octopus presents a novel model for future robotic designs. Octopus arms are similar in function to the human tongue and the elephant trunk; they are muscular hydrostats that use incompressible muscle in different arrangements to produce movement. The current study provides a basis for investigating motor control of the entire octopus arm. Soft, ultra-flexible robotic arms could enable many new applications, e.g., inspecting unstructured and cluttered environments such as collapsed buildings, or gentler medical inspection of alimentary or respiratory pathways.

The wily octopus: king of flexibility 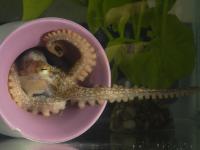