GAINESVILLE, Fla. --- Say "primate" and most people wouldn't think of a tree-dwelling, squirrel-like creature that weighs no more than a deck of playing cards, but a new study suggests that may perfectly describe humans' earliest primate ancestors.

Found in the same area of Montana that yielded the massive Tyrannosaurus rex, new ankle bones smaller than a penny provide the first fossil evidence that the oldest primates lived in trees.

That's important because living in trees gave those early primates access to food sources that other species lacked -- likely a critical factor in why primates succeeded in evolution where others may have failed.

The study appearing this week in the online edition of the Proceedings of the National Academy of Sciences describes the first bones below the skull of Purgatorius -- previously known only by its teeth. The shape of the teeth allowed paleontologists to determine the tree shrew-like animal ate insects and plants, but researchers knew little else about how the creature lived.

The wide range of mobility in the joints of the ankle bones suggests that tiny Purgatorius -- estimated to have weighed about 3.5 ounces -- spent its time climbing trees and reaching for fruit at the edge of limbs, said lead author Stephen Chester, an assistant professor of anthropology at Brooklyn College, City University of New York, who received a bachelor's degree in anthropology from UF.

"These ankle bones have really unique characteristics that indicate a specific kind of mobility that we only find in primates and their closest relatives today," Chester said. "Early primates were using this high degree of mobility to access resources that other animals on the ground couldn't reach."

The adaptations Purgatorius had for climbing support the idea that the earliest primates diversified at the same time flowering plants became widespread, said co-author Jonathan Bloch, curator of vertebrate paleontology at the Florida Museum of Natural History. Unique adaptations to a changing environment lead to the evolutionary success of the oldest primate ancestors, Bloch said.

"While Purgatorius is found just after a dramatic extinction that includes all non-avian dinosaurs, the new fossils suggest that the divergence of primates from other mammals was a more subtle event," Bloch said. "The beginning of primate evolution involved small modifications of the skeleton, making it easier to move through trees and eat the fruits, flowers, and leaves that they encountered."

Bloch and Chester found the ankle bones among boxes full of small and fragmented unidentified fossils recovered from the Garbani Channel sites in Montana by paleontologist and study co-author William Clemens, a professor emeritus in the department of integrated biology at the University of California, Berkeley. The area is famous for producing the holotype specimen of T. rex. The ankle bones were found in the same area as the teeth of Purgatorius and compared with the ankles of later primates, Clemens said.

"This discovery gives us an idea of what the rest of the animal looked like and what it could do," Clemens said. "The take-home message is that arboreal life evolved early in the history of primates and is shared by most of their descendants."

As you dig deeper back in time, you start finding animals with fewer characteristics that people think of as primate-like when they think of today's primates, Chester said, which can make it difficult to distinguish the early ancestors of modern primates.

Bloch and Douglas Boyer, an assistant professor of anthropology at Duke University and study co-author, have worked throughout their careers to identify and uncover fossilized skeletons of many species of early primates.

"You couldn't possibly have predicted this animal if you only looked at the types of mammals that are alive today," Bloch said. "This is something you only find in the fossil record." 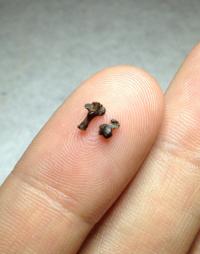