Since the country opened its market to China in the late 1980s, a huge amount of wildlife and its products has been transported across the border every year. Species have also been exported to other Asian countries, Europe and the USA. Furthermore, in recent years, Vietnam has also supported the transit of pangolin scales and other wildlife products from across Asia and even as far as Africa all the way to China and other destinations.

Additionally, in line with the expanding wealthy middle class, consumption of wildlife and its products has risen dramatically in Vietnam. As a consequence, the country takes on all three major roles in the international wildlife trade: export, transit and consumption.

Freshwater turtles and tortoises make up a large part of the international trade between Vietnam and China and the domestic trade within Vietnam. Meanwhile, due to the increasing use of social networks, wildlife trade is shifting to online-based platforms, thereby further facilitating access to threatened species. Consequently, the Vietnamese pond turtle and the Swinhoe's softshell turtle, for example, are already on the brink of extinction. Despite the repeated recent survey efforts of conservation biologists, no viable populations of their species have been found.

One of the effective approaches to the conservation of the most endangered species is to have confiscated animals released back into the wild, following the necessary treatment and quarantine, or transferring them to conservation breeding programmes. However, in either of the cases, it is necessary to know about the origin of the animals, because the release of individuals at sites they are not naturally adapted to, or at localities inhabited by populations of incompatible genetic makeup can have negative effects both on the gene pool and ecosystem health.

In the present research article, published in the peer-reviewed open-access scientific journal Nature Conservation, turtle conservationist and molecular biologist Dr. Minh D. Le of Vietnam National University (Hanoi) and the American Museum of Natural History (New York), in collaboration with the Cologne Zoo (Germany) and the Asian Turtle Program - Indo-Myanmar Conservation (Hanoi), the Institute of Ecology and Biological Resources (Hanoi) and Hanoi Procuratorate University (Hanoi), studies the geographic distribution of genetic diversity of the endangered Four-eyed turtle (Sacalia quadriocellata). The species, whose common name relates to the four eye-resembling spots, located on the back of its head, has traditionally been neglected by scientific and conservation efforts.

Having analysed field-collected and local trade samples along with confiscated animals, the researchers concluded that there is a significant number of genetically distinct lineages distributed in Vietnam and China, and that local trade samples could provide key data for resolving the genetic patterns of the species. They remind that Four-eyed turtles are getting more and more difficult to find in the wild.

On the other hand, the study highlights that confiscated animals are of various origin and, therefore, must not be released arbitrarily where they have been seized. Instead, the researchers recommend that captive programmes establish regular genetic screenings to determine the origin of confiscated turtles, so that the risk of crossing different lineages is eliminated. Such genetic screenings are of crucial importance to solve the current issues with biodiversity conservation in the country and the region.

"Like other developing countries, Vietnam does not have any specific guidelines on how to release confiscated animals back into the wild yet. This and other similar studies emphasise the role of the government in the implementation of stricter laws and regulation," said Dr. Minh D. Le, lead author of the study.

"This research once more underscores the IUCN's One Plan Approach, which aims to develop integrative strategies to combine in situ and ex situ measures with expert groups, for the purposes of species conservation," added Dr. Thomas Ziegler of the Cologne Zoo.

The research was funded by the Critical Ecosystem Partnership Fund, the Partnership for Enhanced Engagement in Research (PEER), the United States Agency for International Development, the US Fish and Wildlife Service, Vietnam's Ministry of Science and Technology and IDEAWILD.

Wildlife trade threats: The importance of genetic data in saving an endangered species 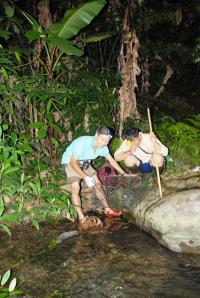 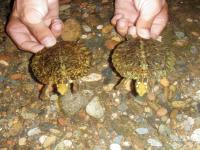