NASA's Global Hawk 872 aircraft flew over Hurricane Cristobal on August 28 and 29 and gathered data on the storm as it was becoming extra-tropical.

NASA's airborne Hurricane and Severe Storm Sentinel, or HS3, mission kicked off on August 26 when one of the remotely piloted Global Hawk aircraft flew a "lawnmower" or back and forth pattern over Hurricane Cristobal while gathering data using dropsondes and two other instruments. The Global Hawk dropped 81 dropsondes over Cristobal. A dropsonde is a device that measures winds, temperature, pressure and humidity as it falls from the aircraft to the surface.

The Global Hawk flew a second mission over Cristobal over August 28 and 29 and dropped sondes over the storm when it was becoming extra-tropical.

A conversion to an "extra tropical" storm means that the tropical low pressure system eventually loses its warm core and becomes a cold-core system. During the time it is becoming extra-tropical the cyclone's primary energy source changes from the release of latent heat from condensation (from thunderstorms near the storm's center) to baroclinic (temperature and air pressure) processes. When a cyclone becomes extra-tropical it will usually connect with nearby fronts and or troughs (extended areas of low pressure) consistent with a baroclinic (pressure) system. When that happens it appears the system grows larger while the core weakens.

During the August 28-29 Global Hawk overflights, the dropsonde data showed maximum low-level winds of 85-90 knots (97.8 to 103.6 mph/157.4 to 166.7 kph) just east and northwest of the center of circulation (near 49 degrees west longitude and 43.5 north latitude). These strong winds were located 150-300 km from the storm center, suggesting a shift of the strongest winds outward from the center compared to earlier stages in Cristobal's lifecycle.

Dropsonde data also revealed that very dry air was rapidly moving eastward across the western and southern sides of the storm as it was making its transition.

The Cloud Physics Lidar, or CPL, instrument that also flew aboard the Global Hawk detected only shallow clouds across the western and southern portions of the storm, but saw clouds quickly build up to near 10 kilometers (6.2 miles) on the eastern side.

The HS3 mission is funded by NASA Headquarters and overseen by NASA's Earth System Science Pathfinder Program at NASA's Langley Research Center in Hampton, Virginia. It is one of five large airborne campaigns operating under the Earth Venture program. 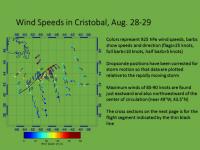 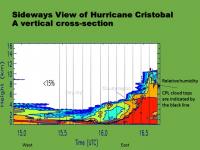