When drought reshuffles the green-up of habitats that mule deer migrate across, it dramatically shortens the annual foraging bonanza they rely on.

That is the main finding of a new University of Wyoming study, which shows the benefits of migration are likely to decrease for mule deer and other migratory herbivores as drought becomes more common due to ongoing climate change.

Drought reduces the availability of key food resources by shortening the duration of spring green-up -- and altering the progression of the "green wave" across the landscape.

The study was conducted by a team of researchers working with lead author Ellen Aikens, a 2019 graduate of the Wyoming Cooperative Fish and Wildlife Research Unit at UW. The paper was published this week in Global Change Biology, a leading journal documenting the biological effects of global change.

"This research shows that climate change can alter the underlying distribution of food resources by compressing the time when optimal forage is available, which reduces the benefit of migration," Aikens says. "This work highlights an emerging threat to migratory mule deer and likely many other migratory species."

Aikens' analysis combined 19 years of drought data going back to 2001, with a 2013-15 GPS dataset of mule deer migrations in the Wyoming Range.

In a wet year, the study found that mule deer have access to newly sprouted springtime plants during an extended period, up to 120 days. That's a full four months when snow is melting, and runoff is saturating the soil and causing forage plants such as sticky purple geranium to emerge.

Deer get a significant portion of their forage benefit for the entire year by following this green wave of plants, which, in wet years, progresses in an orderly fashion from low-elevation winter ranges to summer ranges in the high mountains.

Previous work by Aikens has shown that mule deer are experts at "surfing the green wave" across the landscape. Their movements allow them to always be in the right place at the right time to consume plants at their peak green-up, when they are protein-rich and easy to digest.

Access to green-up provides mule deer their best chance to recover from harsh winters and to replenish lost body fat. They need sufficient fat to rear young and survive the coming winter.

In dry years, the green wave sweeps across the landscape in about half the time, roughly 60 days, the researchers found.

In essence, the good times don't last as long.

Although deer surf these altered green waves as best they can, they only have half the time -- only two months -- to eat plants at peak forage quality.

The researchers found that drought also makes for more patchy migration routes, where the green-up does not occur in sequence from low to high elevation. Patterns of green-up in dry years were quicker, less wave-like and, consequently, provided less of a foraging benefit to migrating mule deer.

One thing that didn't change in drought years was the remarkable ability of deer to move and track plants at the highest nutritional value. Deer "surfed" right along with these same peak waves of plant growth in wet years and in dry years. Even in drought, there was no "trophic mismatch," a situation where migration timing is mismatched with food resources.

Though researchers hoped to find that some migration routes were buffered from drought effects -- perhaps those that traverse shady north-facing slopes -- they found such routes did not exist. Instead, the best migration routes that produced the most abundant forage and the longest duration of green-up in wet years also were the most severely impacted by drought.

"This is a globally important study, because the findings ought to be relevant across the temperate landscapes of North America and Europe," says Matthew Kauffman, director of the Wyoming Cooperative Fish and Wildlife Research Unit and a co-author of the study.

"This study has revealed an underappreciated mechanism by which climate change is altering green-up and making migration less profitable for ungulates," Kauffman says. "We are identifying a new threat for migrating ungulates, which will likely worsen as climate change continues." 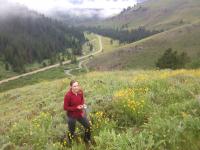