Scientists at the University of Sydney have analysed up to 22 years of long-term monitoring data on plants and animals in central Australia to project how changing rainfall and wildfire patterns, because of climate change, will influence desert wildlife.

The research from the University of Sydney's School of Life and Environmental Sciences found there could be decreases in the cover of the dominant plant, spinifex, and a resulting decrease in seeding - and that introduced cats and foxes pose one of the major threats to seed-eating rodents.

Spinifex is a major habitat type across central Australia - from Queensland to Western Australia, including in the Simpson Desert where this study was conducted.

The findings are being published in the Royal Society's journal Open Science.

Some estimates have suggested that up to one in six species are at risk from climate change. Predators can take advantage of more open habitats for hunting, which puts more pressure on wildlife.

Lead author Dr Aaron Greenville said their model suggested that if removing introduced cats and foxes, the rodent population would increase by almost one in 10.

The researchers, Dr Aaron Greenville, Professor Glenda Wardle and Professor Chris Dickman, in addition to working in the Faculty of Science, are affiliated with the Desert Ecology Research Group and the Terrestrial Ecosystem Research Network in Australia.

The paper, "Desert mammal populations are limited by introduced predators rather than future climate change", will be available online at http://rsos.royalsocietypublishing.org/lookup/doi/10.1098/rsos.170384

Funder
This work was funded by the Australian Research Council and the Australian Government's TerrestrialEcosystem Research Network (www.tern.gov.au), an Australian research infrastructure facility established under the National Collaborative Research Infrast 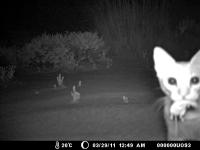