A Sun-like star with orbiting planets, dating back to the dawn of the Galaxy, has been discovered by an international team of astronomers.

At 11.2 billion years old it is the oldest star with earth-sized planets ever found and proves that such planets have formed throughout the history of the Universe.

The star, named Kepler-444, hosts five planets smaller than Earth, with sizes varying between those of Mercury and Venus.

"We've never seen anything like this - it is such an old star and the large number of small planets make it very special," said Dr Daniel Huber from the University's School of Physics and an author on the paper.

"It is extraordinary that such an ancient system of terrestrial-sized planets formed when the universe was just starting out, at a fifth its current age. Kepler-444 is two and a half times older than our solar system, which is only a youthful 4.5 billion years old.

"This tells us that planets this size have formed for most of the history of the universe and we are much better placed to understand exactly when this began happening."

Dr Tiago Campante, the research leader from the University of Birmingham said, "We now know that Earth-sized planets have formed throughout most of the Universe's 13.8-billion-year history, which could provide scope for the existence of ancient life in the Galaxy."

Together with their international colleagues the University's astronomy team used asteroseismology to determine the age of the star and planets. This technique measures oscillations - the natural resonances of the host star caused by sound waves trapped within it.

They lead to miniscule changes or pulses in the star's brightness and allow researchers to measure its diameter, mass, and age. The presence and size of the planets is detected by the dimming that occurs when the planets pass across the face of the star. This fading in the intensity of the light received from the star enables scientists to accurately measure the sizes of the planets relative to the size of the star.

"When asteroseismology emerged about two decades ago we could only use it on the Sun and a few bright stars, but thanks to Kepler we can now apply the technique to literally thousands of stars. Asteroseismology allows us to precisely measure the radius of Kepler-444 and hence the sizes of its planets. For the smallest planet in the Kepler-444 system, which is slightly larger than Mercury, we measured its size with an uncertainty of only 100km," Dr Huber said.

"It was clear early on that we had discovered something very unusual because we had five planets orbiting a very bright star - one of the brightest Kepler has observed. It is fantastic that we can use asteroseismology to date the star and determine just how old it is.

"In the case of Kepler-444 the planets orbit their parent star in less than 10 days, at less than one-tenth the Earth's distance from the Sun. Their closeness to their host star means they are uninhabitable because of the lack of liquid water and high levels of radiation. Nevertheless, discoveries like Kepler-444 provide important clues on whether a planet that is more truly comparable to Earth may exist. "We're another step closer towards finding the astronomers' holy grail - an Earth-sized planet with a one year orbit around a star similar to our Sun." 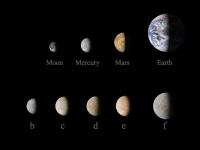