Scientists have shown for the first time that the brain is involved in the development of a heart condition called Takotsubo syndrome (TTS). They found that regions of the brain responsible for processing emotions and controlling the unconscious workings of the body, such as heart beat, breathing and digestion, do not communicate with each other as well in TTS patients as in healthy people.

The study is published in the European Heart Journal [1] today (Tuesday) and the researchers say that although, at this stage, they cannot show that the reduced brain functions definitely cause TTS, their findings suggest that these alterations in the central nervous system may be part of the mechanism involved and they are linked with the onset of TTS in response to stressful or emotional triggers.

TTS is known as "broken heart" syndrome and is characterised by a sudden temporary weakening of the heart muscles that causes the left ventricle of the heart to balloon out at the bottom while the neck remains narrow, creating a shape resembling a Japanese octopus trap, from which it gets its name. Since this relatively rare condition was first described in 1990, evidence has suggested that it is typically triggered by episodes of severe emotional distress, such as grief, anger or fear, or reactions to happy or joyful events. Patients develop chest pains and breathlessness, and it can lead to heart attacks and death. TTS is more common in women with only 10% of cases occurring in men. [2]

In an unusual example of collaboration between neuroscientists and cardiologists, researchers carried out MRI brain scans in 15 TTS patients taken from the InterTAK Registry, established at the University Hospital Zurich, Switzerland, in 2011 [3]. They compared the scans with those from 39 healthy people. The scans were performed between July 2013 and July 2014 and the average time between TTS diagnosis and the MRI scans was about a year.

Professor Christian Templin, principle investigator at the Registry and professor of cardiology at University Hospital Zurich, said: "We were interested in four specific brain regions that are spatially separate from one another but functionally connected, meaning they share information. We found that TTS patients had decreased communication between brain regions associated with emotional processing and the autonomic nervous system, which controls the unconscious workings of the body, compared to the healthy people.

"For the first time, we have identified a correlation between alterations to the functional activity of specific brain regions and TTS, which strongly supports the idea that the brain is involved in the underlying mechanism of TTS. Emotional and physical stress are strongly associated with TTS, and it has been hypothesised that the overstimulation of the autonomic nervous system may lead to TTS events."

"Importantly, the regions we've identified as communicating less with one another in TTS patients are the same brain regions that are thought to control our response to stress. Therefore, this decrease in communication could negatively affect the way patients respond to stress and make them more susceptible to developing TTS," said Professor Templin.

A limitation of the study is that the researchers did not have MRI scans of patients' brains before or at the time they developed TTS, so cannot say for certain that the decreased communication between brain regions caused the TTS or vice versa.

Co-author, Dr Jelena Ghadri, a senior research associate at the University Hospital Zurich and co-principle investigator of the InterTAK Registry, said: "Our results suggest that additional studies should be conducted to determine whether this is a causal relationship. We hope this study offers new starting points for studying TTS in terms of understanding that it much more than 'broken heart' syndrome and clearly involves interactions between the brain and the heart, which are still not fully understood. We are at the beginning of learning more about this complex disorder. Hopefully, one day new findings can be translated into developments in preventive, therapeutic and diagnostic strategies to improve patient care.

"Of note, this study presents the results of a collaboration between neuroscientists and cardiologists. One problem in TTS research is that usually cardiologists only focus on the heart; we believe that approaching TTS in a multidisciplinary way might help to uncover the real nature and causes of this disease. The methods we used are mainly neuroscientific in nature, but the findings we uncovered are, in our view, of major importance for cardiologists in understanding TTS."

[3] The InterTAK Registry is a worldwide network, including more than 40 different cardiology centres in more than 18 countries. The University Hospital Zurich has become a centre of excellence, specialising in the care of TTS patients, while also carrying out translational and basic science research.

'Broken heart' syndrome may originate in the brain 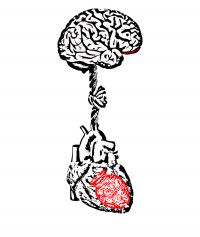 'Broken Heart' Syndrome May Originate In The Brain