An analysis of the songs of most of the world's passerine birds reveals that the frequency at which birds sing mostly depends on body size, but is also influenced by sexual selection. The new study from researchers of the Max Planck Institute for Ornithology and colleagues suggests that habitat characteristics do not affect song frequency, thereby refuting a long-standing theory.

Many animals use acoustic signals for communication. These signals have evolved to maximize the effectiveness of the transmission and reception of the sounds, because this helps finding a mate or avoiding predation. One of the fundamental characteristics of acoustic signals is the frequency of the sound. In forested habitats, acoustic signals become attenuated because of sound absorption and scattering from foliage, which is particularly problematic for high-frequency sounds. Hence, a theory from the 1970s predicts that animals living in habitats with dense vegetation emit lower-frequency sounds compared to those living in open areas.

A team of researchers led by Bart Kempenaers from the Max Planck Institute for Ornithology in Seewiesen and Tomáš Albrecht from the Charles University in Praha and the Czech Academy of Sciences analysed the variation in song frequency of more than 5.000 passerine bird species, encompassing 85% of all passerines and half of all avian taxa. PhD student Peter Mikula collected song recordings primarily from xeno-canto, a citizen science repository of bird vocalizations, and from the Macaulay Library of the Cornell Lab of Ornithology.

Contrary to the theory, the study reveals that the peak frequency of passerine song does not depend on habitat type. If anything, the data suggest that species living in densely vegetated habitats sing at lower frequencies, which is the opposite of what was predicted. As expected from basic physical principles, the researchers found a strong relationship between song frequency and body size and an effect of shared ancestry. "Both limit the range of sound frequencies an animal can produce", says first author Peter Mikula. Heavier species sing at lower frequencies simply due to the larger vibratory structures of the vocal apparatus.

The study further reveals that species in which males are larger than females produce songs with lower frequencies than expected from their size. "This supports the hypothesis that the frequency of acoustic signals is affected by competition for access to mates", says Bart Kempenaers. Song frequency may act as an indicator of an individual's size and therefore of its dominance or fighting abilities. Thus, song frequency could influence reproductive success through competition with other males or even because it influences male attractiveness to females.

"Our results suggest that the global variation in passerine song frequency is mostly driven by natural and sexual selection causing evolutionary shifts in body size rather than by habitat-related selection on sound propagation", summarizes Tomáš Albrecht. 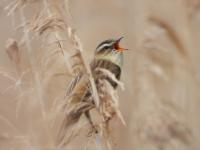