Barcelona, Spain, 28 September 2019 - Liquid biopsy is likely to play an increasing role in identifying patients with colorectal cancer (CRC) who are likely to relapse after surgery, and has potential for optimising treatment for individual patients, according to new research presented at the ESMO Congress 2019. (1,2,3).

Of 805 patients in the phase III IDEA-FRANCE trial who had liquid biopsy prior to adjuvant chemotherapy for stage III CRC, 109 (13.5%) had circulating tumour DNA (ctDNA) in their blood. (1) In this group, two-year disease-free survival (DFS) was 64%, compared to 82% in those who were ctDNA negative.

"In this large prospective trial, we confirmed that ctDNA is an independent prognostic factor in colorectal cancer and that approximately six out of 10 patients who are ctDNA positive will remain disease-free two years after standard adjuvant chemotherapy, compared to eight out of 10 of those who are ctDNA negative," said study author Prof Julien Taieb, Hopital European Georges Pompidou, Paris, France.

"ctDNA testing did not predict which patients should have three or six months of adjuvant chemotherapy and there is continuing debate over the optimal type and duration of treatment for patients who are ctDNA positive, but we do now know that ctDNA is a major prognostic factor which will be very useful in stratifying patients and driving future trials of colorectal cancer," said Taieb. "In all subgroups, ctDNA positive patients who only had three months of adjuvant therapy had the worst prognosis," he added.

Thirty to 50% of patients with localised CRC relapse despite primary optimal therapy, and a second study reported at the ESMO Congress 2019 investigated whether ctDNA can be used to detect minimal residual disease and identify those at risk of recurrence. (2) The results showed that post-surgical plasma ctDNA predicted metastatic relapse a median of 10 months before recurrence was visible on radiological scans (hazard ratio 11.33; p=0.0001). The re-searchers concluded that plasma ctDNA testing opens up an opportunity for precision treatment of patients with localised CRC.

Commenting on the results of the CRC presentations, Prof Alberto Bardelli, University of Turin, Italy, said: "When patients have surgery for early stage colorectal cancer, doubts remain as to whether the disease has been completely eradicated and, as a result, patients often receive adjuvant chemotherapy. However, the IDEA-FRANCE results have shown we can now use a blood test to say whether the patient is clear or not."

"The study is also one of the first to show that, in the future, it may be possible to use liquid biopsy to direct therapy and identify which patients can avoid chemotherapy after their surgery and which should have it. If further studies confirm the results of IDEA-FRANCE, I think they will change clinical practice, so the new data are very exciting," added Bardelli.

Figure 1. Disease-free survival according to the ctDNA status

Background: ctDNA has been recently suggested as a major prognostic factor in resected stage II and III colon cancer patients (pts)1,2. Its predictive value for adjuvant treatment intensity or duration is currently unknown. We have analyzed here ctDNA from pts enrolled in the IDEA-FRANCE trial3, its prognostic value and its predictive value for treatment duration (3 or 6 months).

Methods: ctDNA was tested by using the detection of 2 methylated markers (WIF1 and NPY) by digital droplet PCR accordingly to a method developed and validated for colorectal cancer 4-6. Comparisons for pts and tumor characteristics and DFS will be done between the ctDNA tested pts and the full study population and between ctDNA positive and negative pts. DFS has been analyzed in the 6 and 3M treatment arms according to ctDNA results. Subgroup analyses for high- and low-risk pts were pre-planned.

Conclusions: In this first ctDNA assessment on a large series coming from a phase III clinical trial we found 13.5% of pts with ctDNA post-surgery. ctDNA was confirmed as an independent prognostic marker. In this series, 6 months of treatment seems better in both ctDNA+ and- pts. 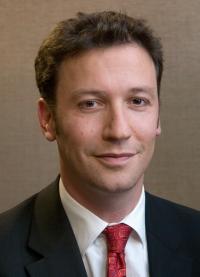