For 30 years, University of Tokyo Associate Professor Hisayoshi Nozaki has traveled an hour west of Tokyo to visit the Sagami River and collect algal samples to understand how living things evolved different sexes. Through new analysis of samples collected in 2007 and 2013 from dam lakes along the river, Lake Sagami and Lake Tsukui, researchers identified a species of freshwater algae that evolved three different sexes, all of which can breed in pairs with each other.

This phenomenon of three sexes is slightly different from hermaphroditism. In species that normally have two sexes, a hermaphroditic individual who can produce both the male and female sex cells usually exists due to unusual gene expression. Many plants and some invertebrate species have three sexes due to normal gene expression, but this is the first time a species of algae or fungi has been identified with three sexes.

The threes sexes of the Pleodorina starrii algae are male, female, and a third sex that researchers call bisexual in reference to the fact that it can produce both male and female sex cells in a single genotype and exists due to normal expression of the species' genes. These algae are 32- or 64-celled organisms and have small mobile (male) and large immobile (female) sex cells.

"It seems very uncommon to find a species with three sexes, but in natural conditions, I think it may not be so rare," said Nozaki, the last author of the research paper published in Evolution.

Evoluntionarily ancient living things have sex cells that are similar in appearance and known as plus or minus, rather than male or female. More recently evolved species usually have dramatic differences between the sex cells, like the large egg and small spermatozoa of humans.

Nozaki and his colleagues are interested in Pleodorina starrii because it and its close evolutionary cousins use different sex systems, so they are useful models to study the genetics of how sex evolved. P. starrii had been identified decades prior, but had not been studied in detail.

In the lab, researchers can watch green P. starrii cells grow in spherical colonies with other individuals of their sex. Male colonies are recognizable by the clear packets of sperm they release into the water. The sperm packets swim until they hit a female colony, then split up into individual sperm cells that enter individual female cells and combine to produce a new generation.

In 2006, Nozaki and other University of Tokyo experts were the first to find a male-specific gene in P. starrii, which they named OTOKOGI, a Japanese word meaning "manly." In 2010, they found a group of female-only genes and named them HIBOTAN, or "scarlet peony," after a 1960s film franchise where the lead female character had a red flower tattoo.

After genetic analysis and more mating trials, researchers eventually concluded that P. starrii has a "bisexual-factor" gene that is likely located on a chromosome separate from the OTOKOGI and HIBOTAN sex genes. Cells in genetically bisexual P. starrii possess both OTOKOGI and bisexual-factor genes, but they can produce normal male or female colonies when they reproduce sexually with other P. starrii colonies.

Genetically male P. starrii have only the OTOKOGI male-type gene and genetically female can have either only the female-type HIBOTAN genes or both HIBOTAN and the bisexual-factor genes.

More experiments are needed to understand genes in more detail, but researchers suspect that the bisexual factor may only be active in the presence of the "manly" OTOKOGI.

"This finding was possible because of our very long-term experience of going on field collection trips and our practice growing and studying algae. Continued, long-term studies are very important to unveil the true nature of species in the natural world," Nozaki commented.

Laboratory of Origin of Eukaryote Biodiversity (Japanese only): http://www.bs.s.u-tokyo.ac.jp/~tayousei/index.html

Ministry of Education, Culture, Sports, Science and Technology and Japan Society for the Promotion of Science 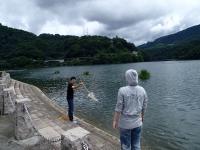 Male and female Pleodorina starrii under a light microscope