The effect of nitric acid on aerosol particles in the atmosphere may offer an explanation for the smog seen engulfing cities on frosty days. Under laboratory conditions, researchers at CERN in Switzerland observed the formation of atmospheric aerosols and discovered new information on the link between nitrogen oxides, originating in traffic and the energy industry, and the climate and air quality. These findings were published in the Nature and Science Advances journals.

Based on the findings, nitrogen compounds can, depending on the circumstances, either slow down or accelerate the growth of aerosol particles. This means that reducing sulphur dioxide is not on its own enough to prevent the smog problem seen in large cities. Instead, a comprehensive understanding of the atmospheric particle formation process is needed.

Earlier, nitric acid was not thought to have a significant effect on the formation or early growth of aerosol particles, even though nitrate compounds often occur in larger particles. However, the study published in Nature demonstrates that, in cold climates, nitric acid can boost particle growth to a marked degree, and even form particles together with ammonia in temperatures under -15°C. This is significant, as there are up to a thousand times more nitric acid and ammonia than sulphuric acid in the atmosphere.

The discovery could explain why particles are formed even in highly polluted big cities, notwithstanding the established knowledge according to which pollutants should prevent the formation and growth of new particles. The same mechanism may also generate particles higher up in the atmosphere, where the temperature is always cold and nitrogen oxides are produced as a result of lightnings.

At the same time, nitrogen oxides also affect the oxidation characteristics of organic compounds in the atmosphere. In the project headed by University of Helsinki researchers, it was found that nitrogen oxides increase the volatility of the oxidation products of organic compounds. As a result, particle growth slows down and a smaller share of particles survive compared to circumstances where the air is clean. In areas where particle growth is promoted mainly by organic compounds, such as in the boreal forest zone, the phenomenon can reduce the number of aerosols that form clouds, indirectly resulting in warming the climate. This study was published in the Science Advances journal.

Both studies are based on laboratory experiments carried out at CERN, the European Organization for Nuclear Research. The CLOUD chamber at CERN makes it possible to investigate the formation and growth of aerosol particles with unparalleled precision. The Finnish participants in the CLOUD experiments include the University of Helsinki's Institute for Atmospheric and Earth System Research, the Finnish Meteorological Institute and the University of Eastern Finland.

A potential explanation for urban smog 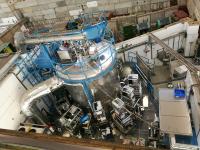 the CLOUD chamber at CERN