BLOOMINGTON, Ind. -- The function of horned beetles' wild protrusions has been a matter of some consternation for biologists. Digging seemed plausible; combat and mate selection, more likely. Even Charles Darwin once weighed in on the matter, suggesting -- one imagines with some frustration -- the horns were merely ornamental.

In this month's American Naturalist (Dec. 2006) and the Nov. 2006 issue of Evolution, Indiana University Bloomington scientists present an entirely new function for the horns: during their development, Onthophagus horned beetles use their young horns as a sort of can opener, helping them bust out of thick larval shells.

The finding will surprise anyone who assumed hornless Onthophagus adults (usually the females) never form the horns in the first place. They do, the scientists say, but the nubile horn tissue is reabsorbed before the beetles' emergence as adults.

"The formation of horns by beetle pupas that soon lose them just doesn't seem to make sense, so obviously we were intrigued," said IU Bloomington evolutionary biologist Armin Moczek, lead author of both papers. "It appears these pre-adult horns are not a vestigial type of structure, which many of us thought was the case. Instead we have shown these horns actually serve an important function regardless of whether they are resorbed in the pupal stage or maintained into the adult."

Because all the Onthophagus beetles the scientists examined form horns during development, Moczek and colleagues also argue the evolution of ornate horns in the adult beetles may actually have happened second -- that is, some time after their initial evolution as larval molting devices.

In the Evolution report, the scientists examined literature describing the evolutionary relationship of 47 Onthophagus species. They also studied the development of eight beetle species in the laboratory (seven Onthophagus species and one species from the closely related but hornless genus Oniticellus).

The scientists found that all seven Onthophagus species examined in the laboratory develop horns during their larval and pupal development. That finding should instigate a complete revision of the evolutionary history of Onthophagus beetles, which are largely categorized according to their adult shapes with little or no heed given to the quirks of the beetles' development.

Despite the growing presence of developmental biology in evolutionary studies, "Even today, evolutionary theory is very much a theory of adults," Moczek said. "But evolution doesn't morph one adult shape into another. Instead there's an entire lifetime of development that we can't afford to ignore."

Curious as to whether or not the horns had a function, the scientists destroyed the horn tissue of beetle larvae using electrosurgery: minute voltage arcs that permit precise destruction of targeted cells while nearby tissues are left intact and undamaged. With the larval horn tissue destroyed, the scientists observed most larvae were unable to break the husks of their larval head capsules, resulting in young adult hatchlings whose heads were tightly (and lethally) encased within larval helmets. Altered Oniticellus, on the other hand, had no trouble breaking free of their former exoskeletons.

"It may be that these larval horns enabled Onthophagus beetles to grow a thicker carapace," Moczek said. "But it is also possible a thicker carapace made horns necessary. We are left with the commonly asked question in evolutionary developmental biology, 'Which came first"'"

Most scientists have assumed the sexual dimorphism of some Onthophagus beetles was borne of differential growth; flamboyantly horned male beetles grow them, hornless females simply can't. But the American Naturalist report shows that even within sexually dimorphic horned beetle species, both sexes initially form the horns, even if one or both sexes reabsorb the horn tissue sometime before adulthood.

Despite the differences in adult appearance, all four species begin to grow horns as larvae -- regardless of sex, Moczek found. The hornlessness of some adult beetles is therefore not the result of an inability to make horns, Moczek says, but the reshaping or reabsorption of horn tissue before the beetles become adults.

"I think these findings illustrate quite clearly the importance of development to evolutionary biology," Moczek said. "By including studies of your organism's development, at the very least you stand to gain fundamental insights into its biology. More often than not, however, you may prevent yourself from making big mistakes when drawing up evolutionary histories. In this case, I think we did both."

"When ontogeny reveals what phylogeny hides: gain and loss of horns during development and evolution of horned beetles," Evolution, vol. 60, no. 11 (November 2006)

"Pupal remodeling and the development and evolution of sexual dimorphism in horned beetles," American Naturalist, vol. 168, no. 6 (December 2006) 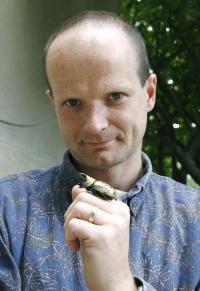