PROVIDENCE, R.I. [Brown University] — Breast cancer patients face many horrors, including those that arise when fighting the cancer itself. Medications given during chemotherapy can have wicked side effects, including vomiting, dizziness, anemia and hair loss. These side effects occur because medications released into the body target healthy cells as well as tumor cells.

The trick becomes how to deliver cancer-fighting drugs directly to the tumor cells. Brown University chemists think they have an answer: They have created a twin nanoparticle that specifically targets the Her-2-positive tumor cell, a type of malignant cell that affects up to 30 percent of breast cancer patients.

The combination nanoparticle binds to the Her-2 tumor cell and unloads the cancer-fighting drug cisplatin directly into the infected cell. The result: Greater success at killing the cancer while minimizing the anti-cancer drug's side effects.

"Like a missile, you don't want the anti-cancer drugs to explode everywhere," explained Shouheng Sun, a chemistry professor at Brown University and an author on the paper published online in The Journal of the American Chemical Society. "You want it to target the tumor cells and not the healthy ones."

In this case, the GPS comes from the iron-oxide nanoparticle, which homes in on a Her-2 breast-cancer cell like a guided missile. The attached antibody is critical, because it binds to the antigen, a protein located on the surface on the malignant cell. Put another way, the nanoparticle vehicle "docks" on the tumor cell when the antibody and the antigen become connected. Once docked, the vehicle unloads its "passenger," the cisplatin, into the malignant cell.

"It's like a magic bullet," said Chenjie Xu, a Brown graduate student and the lead author on the paper. Baodui Wang, a visiting scientist at Brown and now an associate professor at Lanzhou University in China, contributed to the paper.

In laboratory tests, the gold-iron oxide nanoparticle combination successfully targeted the cancer cells and released the anti-cancer drugs into the malignant cells, killing the cells in up to 80 percent of cases. "We made a Mercedes Benz now," Sun joked. "It's not a Honda Civic anymore."

The researchers will test the breast-cancer nanoparticle system in laboratory tests with animals. They also plan to create twin nanoparticles that can release the drug via remote-controlled magnetic heating.

The breast-cancer nanoparticle research was funded by the National Institutes of Health. 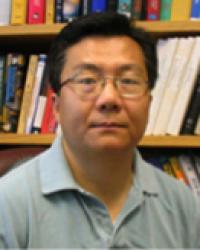