FAIRBANKS, Alaska—Scientists have identified a novel antifreeze molecule in a freeze-tolerant Alaska beetle able to survive temperatures below minus 100 degrees Fahrenheit. Unlike all previously described biological antifreezes that contain protein, this new molecule, called xylomannan, has little or no protein. It is composed of a sugar and a fatty acid and may exist in new places within the cells of organisms.

"The most exciting part of this discovery is that this molecule is a whole new kind of antifreeze that may work in a different location of the cell and in a different way," said zoophysiologist Brian Barnes, director of the University of Alaska Fairbanks Institute of Arctic Biology and one of five scientists who participated in the Alaska Upis ceramboides beetle project.

Just as ice crystals form over ice cream left too long in a freezer, ice crystals in an insect or other organism can draw so much water out of the organism's cells that those cells die. Antifreeze molecules function to keep small ice crystals small or to prevent ice crystals from forming at all. They may help freeze-tolerant organisms survive by preventing freezing from penetrating into cells, a lethal condition. Other insects use these molecules to resist freezing by supercooling when they lower their body temperature below the freezing point without becoming solid.

UAF graduate student and project collaborator Todd Sformo found that the Alaska Upis beetle, which has no common name, first freezes at about minus 18.5 degrees Fahrenheit in the lab and survives temperatures down to about 104 degrees below zero Fahrenheit.

"It seems paradoxical that we find an antifreeze molecule in an organism that wants to freeze and that's adapted to freezing," said Barnes, whose research group is involved in locating insects, determining their strategies of overwintering and identifying the mechanisms that help them get through the winter

A possible advantage of this novel molecule comes from it having the same fatty acid that cells membranes do. This similarity, says Barnes, may allow the molecule to become part of a cell wall and protect the cell from internal ice crystal formation. Antifreeze molecules made of proteins may not fit into cell membranes.

"There are many difficult studies ahead," said Barnes. "To find out how common this biologic antifreeze is and how it actually prevents freezing and where exactly it's located."

This project was led by Kent Walters at the University of Notre Dame with collaborators Anthony Serianni and John H. Duman of UND and Barnes and Sformo of UAF and was published in the Dec. 1 issue of the journal Proceedings of the National Academy of Sciences.

REPORTERS: Brian Barnes is attending the American Geophysical Union fall meeting in San Francisco Dec. 14-18 and will be available by email during that time. 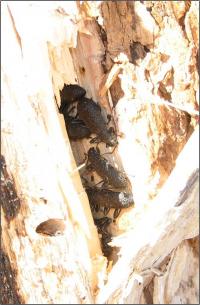