Scientists from Newcastle University have shown that human embryonic stem cells move by travelling back and forth in a line, much like ants moving along their trails.

Human stem cells are at the forefront of modern molecular biology research due to their ability to give rise to any specialist human cell type, a property known as pluripotency.

However, stem cells are notoriously hard to grow in culture so to improve this, a team of mathematicians and stem cells biologists are developing mathematical models of stem cell behaviour, from a single or a few cells up to colonies of thousands.

The research published today in Physical Biology sheds important light on how stem cells interact with each other and their environment.

"At first glance cells appeared to move around aimlessly, but with closer scrutiny subtle patterns became evident," said mathematician and Postgraduate student, Laura Wadkin, who worked alongside postdoctoral researcher Dr Sirio Orozco and academics from the Institute of Genetic Medicine to make the discovery.

"On their own, the cells were seen to shuffle along an almost straight line, often retracing their steps like ants along ant trails.

"When in pairs, the stem cells would each wander around but stay within reach of one another. In fact, we saw that they were often tethered to each other with a narrow link of cytoplasm, a bit like holding hands."

It is hoped by gaining a better understanding into how stem cells react this information can be built into a computer model for predicting and potentially controlling their evolution.

Dr Sirio Orozco, from the School of Mathematics, Statistics and Physics, said: "It is well known that stem cells are gregarious, preferring to huddle together to avoid differentiating into other cell types.

"However, this is the first time this coordinated motion has been recorded and it may be a strategy to optimise the cells chances of locating other stem cells, while never straying too far from the path or their partner.

"A better understanding of this process could help us grow colonies of stem cells in the lab."

If you're interested in studying in this exciting environment, find out more about maths or biomedical genetics at Newcastle University 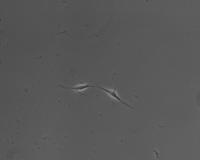