Batavia, Ill.—Scientists of the CDF experiment at the Department of Energy's Fermi National Accelerator Laboratory announced yesterday (March 17) that they have found evidence of an unexpected particle whose curious characteristics may reveal new ways that quarks can combine to form matter. The CDF physicists have called the particle Y(4140), reflecting its measured mass of 4140 Mega-electron volts. Physicists did not predict its existence because Y(4140) appears to flout nature's known rules for fitting quarks and antiquarks together.

"It must be trying to tell us something," said CDF cospokesperson Jacobo Konigsberg of the University of Florida. "So far, we're not sure what that is, but rest assured we'll keep on listening."

Matter as we know it comprises building blocks called quarks. Quarks fit together in various well-established ways to build other particles: mesons, made of a quark-antiquark pair, and baryons, made of three quarks. So far, it's not clear exactly what Y(4140) is made of.

The Y(4140) particle decays into a pair of other particles, the J/psi and the phi, suggesting to physicists that it might be a composition of charm and anticharm quarks. However, the characteristics of this decay do not fit the conventional expectations for such a make-up. Other possible interpretations beyond a simple quark-antiquark structure are hybrid particles that also contain gluons, or even four-quark combinations.

The CDF scientists observed Y(4140) particles in the decay of a much more commonly produced particle containing a bottom quark, the B + meson. Sifting through trillions of proton-antiproton collisions from Fermilab's Tevatron, CDF scientists identified a small sampling of B+ mesons that decayed in an unexpected pattern. Further analysis showed that the B+ mesons were decaying into Y(4140).

The Y(4140) particle is the newest member of a family of particles of similar unusual characteristics observed in the last several years by experimenters at Fermilab's Tevatron as well as at KEK laboratory in Japan and at DOE's SLAC National Accelerator Laboratory in California.

"We congratulate CDF on the first evidence for a new unexpected Y state that decays to J/psi and phi," said Japanese physicist Masanori Yamauchi, a cospokesperson of KEK's Belle experiment. "This state may be related to the Y(3940) state discovered by Belle and might be another example of an exotic hadron containing charm quarks. We will try to confirm this state in our own Belle data."

Theoretical physicists are trying to decode the true nature of these exotic combinations of quarks that fall outside our current understanding of mesons and baryons. Meanwhile experimentalists happily continue to search for more such particles.

"We're building upon our knowledge piece by piece," said CDF cospokesperson Rob Roser of Fermilab, "and with enough pieces, we'll understand how this puzzle fits together."

The Y(4140) observation is the subject of an article submitted by CDF to Physical Review Letters this week. Besides announcing Y(4140), the CDF experiment collaboration is presenting more than 40 new results at the Moriond Conference on Quantum Chromodynamics in Europe this week, including the discovery of electroweak top-quark production and a new limit on the Higgs boson, in concert with experimenters from Fermilab's DZero collaboration. Both experiments are actively pursuing a very broad program of physics, including ever-more-precise measurements of the top and bottom quarks, W and Z bosons and searches for additional new particles and forces.

"Thanks to the remarkable performance of the Tevatron, we expect to greatly increase our data sample in the next couple of years, said Konigsberg. "We'll study better what we've found and hopefully make more discoveries. It's a very exciting time here at Fermilab." 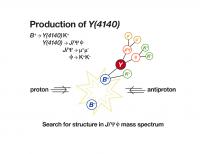 Production of the Y Particle