The most comprehensive evaluation of temperature change on Earth's continents over the past 1,000 to 2,000 years indicates that a long-term cooling trend--caused by factors including fluctuations in the amount and distribution of heat from the sun, and increases in volcanic activity--ended late in the 19th century.

The study also finds that the 20th century ranks as the warmest or nearly the warmest century on all of the continents, except Antarctica. Africa had insufficient data to be included in the analysis.

Global warming that has occurred since the end of the 19th century reversed a persistent long-term global cooling trend, say the researchers.

A consortium of 78 authors from 24 countries, some of them supported by the National Science Foundation (NSF), also note in research published in the May 2013 issue of the journal Nature Geoscience that there were regional differences in temperature evolution.

"This is an example of a large international team effort, collaborating to synthesize new scientific results from a very large, publicly available dataset," said Paul E. Filmer, program director for the Paleoclimate, Sedimentary Geology and Paleobiology and ArcSEES programs in NSF's Geosciences Directorate.

The researchers are members of the "2K Network" of the International Geosphere Biosphere Program (IGBP) Past Global Changes (PAGES) project. The Swiss National Science Foundation and the US NSF jointly support the PAGES International Project Office.

"Global warming that has occurred since the end of the 19th century reversed a persistent long-term global cooling trend," the researchers write in the report.

Because long-range cooling was caused by natural factors that continued to exist in the 20th century, the authors argue, the warming of the 20th century makes it more difficult to discount the effects of the increase of greenhouse gases in the global increase of temperatures measured in recent decades.

However, the researchers note, their study was not specifically designed to assess the extent to which temperature changes can be attributed to various natural and human-caused factors.

"The new results show that climate change is, as usual, more complicated than we expected: long, millennial natural cooling trends were punctuated by warming episodes that turned out to be more local than we thought," Filmer said.

"The natural forces driving the cooling are still present today, but since the nineteenth century an additional, stronger, warming driver has been added: human activity. We cannot match the temperature records since then without factoring in this new driver."

The PAGES 2K study aggregates proxy data, or information from a variety of sources that stand in for actual temperature measurements of past climate.

These primarily include tree-ring analysis, which provides a picture of growth, which in turn is based in part on air temperatures; tree pollen, which registers changes in dominant species; dome corals, which register sea surface temperatures in their annually banded skeletons; the make-up of water molecules contained in ice cores from the Arctic, Antarctic and glaciers in the temperate regions of the globe; and various physical and biological properties of lake sediments.

Darrell S. Kaufman, an NSF-funded researcher at the School of Earth Sciences and Environmental Sustainability at Northern Arizona University and the lead co-author of the PAGES research, focuses on climate signals as recorded in arctic lake sediments.

His NSF-supported grant, Nonlinearities in the Arctic climate system during the Holocene focuses on how climate feedbacks and perturbations result in rapid changes.

"The predominant long-term cooling trend is common in proxy records we study in Alaska and elsewhere in the Arctic. Finding it at lower latitudes and especially in the southern hemisphere was surprising and has important implications for our understanding of the processes that drive climate change."

Coauthor Nicholas McKay, a postdoctoral scholar working with Kaufman at Northern Arizona University, added "my role in the study was to make sure that the patterns we were observing in the data were robust features of the dataset."

Added McKay: "The primary results: The long-term cooling trend, the century-scale differences between regions, and the warmth of the 20th century, are apparent no matter how you look at the data."

The Division of Polar Programs in the Geosciences Directorate supports both Kaufman and McKay.

The PAGES 2K Network analysis focuses on the last 2,000 years because temperatures are well represented in proxy records. Beyond 2,000 years ago, the abundance of information about climate variability decreases and fundamental features of the climatic system diverge from more recent conditions.

While the researchers do not make explicit correlations in their study between the levels of greenhouse gases in the atmosphere during the 20th century and the increased global temperatures, they note that their analysis will serve as a benchmark for future studies.

"Our reconstructions and proxy data compilation," they write, "will be useful in future studies, serving as a benchmark for comparisons with climate-model simulations aimed at understanding the cause of global cooling, and the extent to which externally forced and unforced variability can explain temperature fluctuations at the continental scale."

Additional information about the study is available at the PAGES Website. 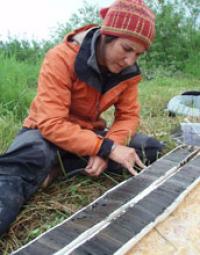