This release is available in Japanese.

Researchers believe that our universe began with the Big Bang about 13 billion years ago, and that soon after that event, the gravitational effects of dark matter began to influence wayward gases. How the first stars formed from this dark matter and gas has been a burning question for years, but a state-of-the-art computer simulation now offers the most detailed picture yet of how these first stars in the universe came into existence, researchers say.

These findings will be published by the journal Science on Friday, 1 August. Science is the journal of AAAS, the nonprofit science society.

The composition of the early universe was quite different from that of today, and the physics that governed the early universe were also somewhat simpler. Dr. Naoki Yoshida and colleagues in Japan and the U.S. incorporated these conditions of the early universe, sometimes referred to as the "cosmic dark ages," to simulate the formation of an astronomical object that would eventually shine its light into this darkness.

The result is a detailed description of the formation of a protostar -- the early stage of a massive primordial star of our universe -- and the researchers' computer simulation, which has been called a "cosmic Rosetta Stone," sets the bar for further investigation into the star formation process. The question of how the first stars evolved is so important because their formations and eventual explosions provided the seeds for subsequent stars to come into being.

According to their simulation, gravity acted on minute density variations in gases and the mysterious "dark matter" of the universe after the Big Bang in order to form this early stage of a star -- a protostar with a mass of just one percent of our sun. The simulation reveals how pre-stellar gases would have actually evolved under the simpler physics of the early universe to form this protostar. Dr. Yoshida's simulation also shows that the protostar would likely evolve into a massive star capable of synthesizing heavy elements, not just in later generations of stars, but soon after the Big Bang.

"This general picture of star formation, and the ability to compare how stellar objects form in different time periods and regions of the universe, will eventually allow investigation into the origins of life and planets," said Lars Hernquist, a Professor of Astronomy at Harvard University and a co-author of this latest report. "The abundance of elements in the universe has increased as stars have accumulated," he says, "and the formation and destruction of stars continues to spread these elements further across the universe. So when you think about it, all of the elements in our bodies originally formed from nuclear reactions in the centers of stars, long ago."

Their simulation of the birth of a protostar in the early universe signifies a key step toward the ambitious goal of piecing together the formation of an entire primordial star and of predicting the mass and properties of these first stars of the universe. More powerful computers, more physical data, and an even larger range will be needed for further calculations and simulations, but these researchers hope to eventually extend this simulation to the point of nuclear reaction initiation -- when a stellar object becomes a true star.

"Dr. Yoshida has taken the study of primordial star formation to a new level with this simulation, but it still gets us only to the halfway point towards our final goal. It is like laying the foundation of a skyscraper," said Volker Bromm, Assistant Professor of Astronomy at the University of Texas, Austin and the author of a companion article. "We must continue our studies in this area to understand how the initially tiny protostar grows, layer by layer, to eventually form a massive star. But here, the physics become much more complicated and even more computational resources are needed."

"Protostar Formation in the Early Universe," by Yoshida et al.

A related Perspective entitled "The Cosmic Rosetta Stone," by Volker Bromm of the University of Texas, Austin, discusses the study.

The American Association for the Advancement of Science (AAAS) is the world's largest general scientific society, and publisher of the journal Science (www.sciencemag.org). AAAS was founded in 1848, and serves 262 affiliated societies and academies of science, reaching 10 million individuals. Science has the largest paid circulation of any peer-reviewed general science journal in the world, with an estimated total readership of 1 million. The nonprofit AAAS (www.aaas.org) is open to all and fulfills its mission to "advance science and serve society" through initiatives in science policy; international programs; science education; and more. For the latest research news, log onto EurekAlert!, www.eurekalert.org, the premier science-news Web site, a service of AAAS.

Dark matter and gas in the early universe 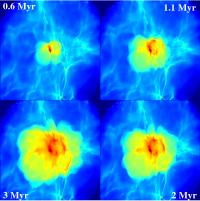