In the high-tech world of science, researchers sometimes need to get back to basics. UC Santa Barbara's Douglas McCauley did just that to study the impacts of the bumphead parrotfish (Bolbometopon muricatum) on coral reef ecosystems at two remote locations in the central Pacific Ocean.

Using direct observation, animal tracking and computer simulation, McCauley, an assistant professor in the Department of Ecology, Evolution and Marine Biology, and his colleagues sought to understand whether the world's largest parrotfish is necessary for positively shaping the structure and functioning of ecosystems. The answer, published in a recent issue of the journal Conservation Biology, is yes and no.

"We actually swam alongside bumphead parrotfish for close to six hours at a time, taking detailed data on what they ate and where they went," McCauley explained. "It was one of the more exhausting but wonderful experiences I've had as a field scientist."

Often more than 4 feet long and weighing in at more than 100 pounds, bumpheads are major coral predators; one fish can consume just over 2 tons of living coral in a year. They are also a threatened species in serious decline across the Pacific. Hunted throughout the region — often at night in sea caves where they sleep — they have cultural significance (i.e., they're coveted for feasting ceremonies) among many Pacific islanders.

"These large parrotfish crunch off entire pieces of reef and audibly grind them up into sand in their pharyngeal mill — specialized teeth in the back of their throat," McCauley explained. "You know bumpheads are near when you begin noticing branches lopped off stony corals and golflike divot scars marking the reef."

McCauley's research demonstrates that bumpheads exert a complex mix of positive and negative effects on reefs. On the plus side, bumpheads reduce the abundance of fast-growing algae that compete with corals for light and space. Their feeding helps corals reproduce by opening up space on reefs. In addition, when feeding, they can disperse small coral fragments around reefs that can later grow into adult coral colonies, just as birds disperse plant seeds.

Conversely, bumpheads eat coral and this predation reduces its abundance and diversity. "They can completely consume small coral colonies, and the feeding scars they leave on large corals can be a source of physiological stress," McCauley said. "The coral skeleton that they grind up and excrete falls also back atop corals as biosediment and this can amount to 50 tons of sediment a year from a school of bumpheads. Sedimentation in other contexts is known to contribute to the smothering of corals."

The team's results highlight the diverse effects that species can have on ecosystems, adding a deeper perspective on understanding the ecological role of endangered species. McCauley noted that conservation often tacitly advances the expectation that endangered species must be good for the environment.

"This viewpoint is ecologically misleading," he added. "Most species do things to ecosystems that we would construe as both positive and negative. Endangered species are no different from their more abundant counterparts." McCauley is quick to add that these findings by no means suggest that declining species like bumphead parrotfish are undeserving of protection.

"We can, in fact, strengthen the integrity of the field of conservation biology by being rigidly objective about the observations we make in nature — even if this means reporting occasionally that rare species can damage ecosystems," he added. "If anything, better understanding the full complement of ways that at-risk species use and affect their environment empowers us to more effectively protect them.

"The case of the bumphead parrotfish is analogous in interesting ways to the African elephant," McCauley continued. "African elephants are a vulnerable and imperiled species that can be agents of deforestation and reduce regional biodiversity. These effects are particularly strong in areas where elephants have been artificially confined in high-density aggregations. Science that describes how elephants reshape ecosystems can help managers more effectively approach the complicated task of reversing severe global elephant declines while protecting local ecosystems. Bumphead parrotfish are to coral reefs what elephants are to African savannas."

Douglas McCauley is available at douglas.mccauley@lifesci.ucsb.edu or (805) 893-4972. Downloadable images are available at http://www.news.ucsb.edu/2014/014341/underwater-elephants.

Bumphead Parrotfish Divot Bites on Coral are Not Insignificant 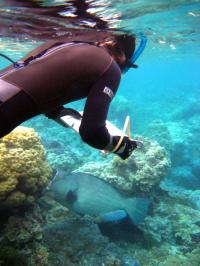