The simple transport of drugs directly into cells is one of the primary goals of the pharmaceutical industry. In large part, we still don't possess a detailed understanding at the molecular level of the processes responsible for transporting substances into and out of cells. In collaboration with colleagues from the Czech Republic and Germany, the research team of Pavel Jungwirth from the Institute of Organic Chemistry and Biochemistry of the Czech Academy of Sciences (IOCB Prague) has discovered a previously unknown mechanism by which short peptides are able to penetrate cells and, in principle, could serve as carriers of drug molecules. The results of their research have now been published in the prestigious scientific journal Proceedings of the National Academy of Sciences of the USA.

The ability of positively charged short peptides to penetrate cells was first observed in HIV research, and today it's gradually being employed to transport drugs into cells. Until now, however, this primarily took the form of so-called vesicular transport, i.e. by means of a transport vesicle separating from the cell membrane and enveloping the transported substance, which must then break free from the vesicle once transport into the cell is complete, potentially posing a technical complication for efficient transportation of the drug. It's known that peptides can also penetrate cells passively, i.e. independently of energy from the cell, but the exact mechanism has yet to be described.

Now, using fluorescence and electron microscopy in combination with molecular computer simulations, the scientists led by Pavel Jungwirth have discovered a previously undescribed passive mechanism for transporting positively charged peptides into cells. It's based on membrane fusion induced by the transported peptides (see the image). The scientists have thus demonstrated that the process of passive transport of peptides into cells and the widely known process of membrane fusion, induced, for instance, by calcium ions in neurons during the transmission of nerve impulses, share the same mechanistic basis - figuratively speaking, they're two sides of the same coin.

"At this point, we can only speculate as to practical applications for the discovery," says Pavel Jungwirth. "If, however, this newly discovered mechanism proves sufficiently robust, in the future we could consider the possibility of passively transporting drug molecules into cells without having to free them from vesicles, which in this process simply don't form."

Pavel Jungwirth and his team have long focused on revealing the laws governing molecular processes in the cell membrane, which to this day are still largely unknown. A better understanding of the basic processes occurring within the membranes of the cells in our bodies gradually opens the door to new possibilities for controlling these processes and thereby conceivably more efficient methods of transporting drug molecules to their site of action.

The Institute of Organic Chemistry and Biochemistry of the Czech Academy of Sciences / IOCB Prague is a leading internationally recognized scientific institution whose primary mis-sion is the pursuit of basic research in chemical biology and medicinal chemistry, organic and materi-als chemistry, chemistry of natural substances, biochemistry and molecular biology, physical chemis-try, theoretical chemistry, and analytical chemistry. An integral part of the IOCB Prague's mission is the implementation of the results of basic research in practice. Emphasis on interdisciplinary research gives rise to a wide range of applications in medicine, pharmacy, and other fields.

Prof. Pavel Jungwirth, DSc. (* 1966 v Praze Professor Pavel Jungwirth, DSc. (b. 1966, Prague) is a Czech physical chemist, educator, and popularizer of science. He studied physics in Prague at the Charles University Faculty of Mathematics and Physics, where he specialized in chemical physics. He received his Candidate of Sciences degree from the J. Heyrovský Institute of Physical Chemistry of the Czech Academy of Sciences for his work in computational chemistry under the guidance of Pro-fessor R. Zahradník. He has spent several years at the University of California, Irvine, the University of Southern California in Los Angeles, and the Hebrew University of Jerusalem.

Currently, Pavel Jungwirth heads a research team at the Institute of Organic Chemistry and Biochemis-try of the Czech Academy of Sciences. He is an external member of the Department of Chemical Physics and Optics at the Charles University Faculty of Mathematics and Physics and is also a Fin-land Distinguished Professor at the Tampere University of Technology.

Pavel Jungwirth has published more than 280 original papers in international journals, including Sci-ence, Nature Chemistry, and PNAS, with over 11,000 citations. He is a senior editor of the Journal of Physical Chemistry, which is published by the American Chemical Society. He is also a President-elect of the Learned Society of the Czech Republic and has received numerous awards, among them the Spiers Memorial Prize of the British Royal Society of Chemistry and the Jaroslav Heyrovský Hon-orary Medal for Merit in the Chemical Sciences from the Czech Academy of Sciences. Pavel Jungwirth's popular-science contributions regularly appear on the pages of the weekly Respekt, and he is a frequent Czech Radio and television guest.

How do peptides penetrate cells? Two sides of the same coin 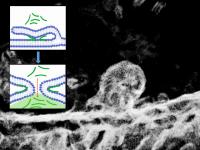