Researchers at UC San Diego have discovered that iron-containing nanoparticles being tested for use in several biomedical applications can be toxic to nerve cells and interfere with the formation of their signal-transmitting extensions.

"Iron is an essential nutrient for mammals and most life forms and iron oxide nanoparticles were generally assumed to be safe," said Sungho Jin, a professor of materials science at UCSD and senior author of a paper to be published in Biomaterials. The paper is currently available on the journal's website. "However, there are recent reports that this type of nanoparticle can be toxic in some cell types, and our discovery of their nano-toxicity in yet another type of cell suggests that these particles may not be as safe as we had once thought."

In their studies, the UCSD researchers used PC12 cells, a line derived from a rat pheochromocytoma. Nerve growth factor prompts PC12 cells to express a variety of neuron-specific genes and generate thin sprout-like cellular extensions called neurites, which are hundreds of times longer than the width of the cell, or up to several millimeters in length. These properties of PC12 cells have made them useful for studying the neurobiological and neurochemical properties of nerve cells.

Jin and the other co-authors of the paper, Thomas R Pisanic, II, Jennifer D. Blackwell, Veronica Shubayev, and Rita Finoñes began their laboratory experiments by coating iron oxide nanoparticles with DMSA (dimercaptosuccinic acid), a metal binding agent that polymerizes on the particles' surface. This coating keeps the particles from clumping together in an aqueous solution, and facilitates their engulfment by the PC12 cells via an inward pouching of the cell membrane called endocytosis. What happened next was a surprise.

Jin's group had initially investigated the nanoparticles for use in in vitro studies as a possible way to manipulate nerve cells remotely with magnetic force. Eventually they had hoped to conduct in vivo experiments, using nanoparticles-laden nerve cells to bridge regions of damaged neurons. However, when they added nerve growth factor to nanoparticle-laden cells in culture flasks, they observed toxic dose-dependent effects: some cells died, and many of the survivors exhibited a diminished ability to produce neurites.

The researchers also studied long protein polymers inside the PC12 cells that make up the cytoskeletal structure. They found that iron oxide nanoparticles resulted in fewer and less organized microtubules and microfilaments, protein polymers involved in cell motility and cell shape.

"It's worth noting that neither iron oxide nanoparticles alone, nor the coating material alone are overtly toxic, but combining the two to create water-soluble nanoparticles has a completely different effect," said Pisanic, who carried out the studies as a part of a Ph.D. thesis project at UCSD.

Iron oxide nanoparticles are considered promising because they are maneuverable by remote magnetic fields, and can be coated with various marker molecules to make them stick selectively to tumors and other targets within the body. The particles can also be made to carry anti-cancer drugs or radioactive materials directly to a tumor. Magnetic nanoparticles designed to attach to cancerous tissue can also be made to heat up by using a remote, alternating magnetic field, thereby selectively killing cancer cells in a process called magnetic hyperthermia.

Many researchers throughout the world are also studying the use of iron-containing nanoparticles in gene therapy, magnetic resonance imaging (MRI), and other medically important applications. While studies have focused primarily on the many potential uses of nanoparticles, Jin said more attention should be paid to their safety. "Our experience leads us to conclude that any analysis of the biocompatibility of nanoparticles should include not just a toxicological study of the component parts," said Pisanic, "but also an examination of the total structure as a whole." 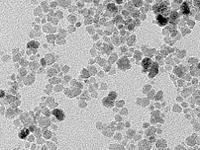