A computer science Ph.D. student can turn his face into a remote control that speeds and slows video playback. The proof-of-concept demonstration is part of a larger project to use automated facial expression recognition to make robots more effective teachers.

Jacob Whitehill, a computer science Ph.D. student from UC San Diego's Jacobs School of Engineering, is leading this project. It builds on technology for detecting facial expressions being developed at UC San Diego's Machine Perception Laboratory (MPLab), part of the Institute for Neural Computation, and housed in the UCSD Division of Calit2.

Watch Jacob Whitehill turn his face into a remote control in a three minute video at: http://video-jsoe.ucsd.edu/asx/Whitehill_UC_San_Diego.wmv.asx

In a recent pilot study, Whitehill and colleagues demonstrated that information within the facial expressions people make while watching recorded video lectures can be used to predict a person's preferred viewing speed of the video and how difficult a person perceives the lecture at each moment in time.

This new work is at the intersection of facial expression recognition research and automated tutoring systems.

"If I am a student dealing with a robot teacher and I am completely puzzled and yet the robot keeps presenting new material, that's not going to be very useful to me. If, instead, the robot stops and says, 'Oh, maybe you're confused,' and I say, 'Yes, thank you for stopping,' that's really good," said Whitehill, the computer science Ph.D. student leading the project.

The work is being presented in June 2008 at two peer-reviewed academic conferences. On June 25, Whitehill presents his findings at the Intelligent Tutoring Systems conference. On Saturday, June 28, Marian Stewart Bartlett, a co-director of the Machine Perception Laboratory, will present this work at the 2008 IEEE International Workshop on Computer Vision and Pattern Recognition for Human Communicative Behavior Analysis.

In the pilot study, the facial movements people made when they perceived the lecture to be difficult varied widely from person to person. Most of the 8 test subjects, however, blinked less frequently during difficult parts of the lecture than during easier portions of the lecture, which is supported by findings in psychology.

One of the next steps for this project is to determine what facial movements one person naturally makes when they are exposed to difficult or easy lecture material. From here, Whitehill could then train a user specific model that predicts when a lecture should be sped up or slowed down based on the spontaneous facial expressions a person makes, explained Whitehill.

To collect examples of the kinds of facial expressions involved in teaching and learning, Whitehill taught a group of people in his lab about German grammar and recorded the sessions using video conferencing software.

"I can see you nodding right now, for instance," said Whitehill during the interview. "That suggests to me that you're understanding, that I can keep going with what I am saying. If you give me a puzzled look, I might back up for a second."

The work is sponsored in part by UCSD's Temporal Dynamics of Learning Center (TDLC), an NSF-sponsored Science of Learning Center. "Jake's research is exemplary of the kind of education-oriented research that we hope will become an increasing part of the Center's research output," commented Gary Cottrell, Director of the TDLC and a computer science professor at UC San Diego.

The goal of UC San Diego's Machine Perception Laboratory (MPLab) is to gain insights into how the brain works by developing systems that perceive and interact with humans in real time using natural communication channels. To this effect, MPLab investigators are developing perceptual primitives to detect and track human faces and to recognize facial expressions. They are also developing algorithms for robots that develop and learn to interact with people on their own. Applications include personal robots, perceptive tutoring systems, and system for clinical assessment, monitoring, and intervention. 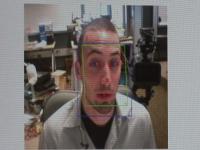 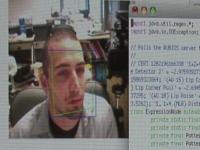