"A typical four-channel optical multiplexer might span more than 2000 wavelengths. This would be about two meters in length in the 300-GHz band," said Dr Daniel Headland from Osaka University who is lead author of the study.

The modulation scheme employed in the team's study was quite basic; terahertz power was simply switched on-and-off to transmit binary data. More advanced techniques are available that can squeeze even higher data rates towards 1 Terabit/s into a given bandwidth allocation.

This study, which is published in the journal Optica and was financed by the Japan Science and Technology Agency (JST) CREST funding program, KAKENHI grant, and an Australia Research Council (ARC) Discovery grant, builds on the team's work in 2020 when they created substrate-free, metal-free, silicon micro-photonics for efficient integrated terahertz devices. This innovation opened a pathway to convert existing nanophotonic multiplexers into the terahertz realm.

The article, "Gratingless integrated tunneling multiplexer for terahertz waves," was published in Optics at DOI: https://doi.org/10.1364/OPTICA.420715

Japan Science and Technology Agency (JST), an advanced network-based research institute that promotes the state-of-the-art R&D projects, will boldly lead the way for co-creation of innovation for tomorrow's world together with society. 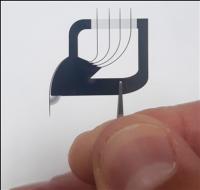