Slugs and other invertebrates provide essential public transport for small worms in the search for food, according to research published in the open access journal BMC Ecology.

Nematode worms (including Caenorhabditis elegans) are around a millimeter long and commonly found in short-lived environments, such as decomposing fruit or other rotting plant material. The worms face a high level of unpredictability in these environments as temperature and food availability fluctuate, and frequently need to move to new locations. However, little is understood on how such a small animal with limited mobility is able to travel long distances to find new food.

Searching in gardens and compost heaps, a team of researchers collected over 600 slugs, and over 400 other invertebrates including flies, centipedes, spiders, beetles and locusts. Through dissection and microscopic analysis, they tested for the presence of nematode worms that may have been hitching a ride on those animals.

The survey revealed that nematode worms are commonly found in slugs, woodlice and centipedes, having possibly been unintentionally taken up while those animals feed on rotting plant material. Further experiments confirmed that the worms invaded the guts of slugs, survived and proliferated within the intestines, and were subsequently excreted alive with the slug feces.

Lead author Hinrich Schulenburg from Christian-Albrechts-Universität, Germany, said: "Even though nematode worms are one of the most intensively studied organisms in almost all biological disciplines, we still have very little understanding of their natural ecology. Our study reveals a previously unknown nematode lifestyle within the guts of slugs. The worms appear to have evolved to persist in the harsh environment of slug intestines, similar to a symbiont or even a parasite."

To test the worm's ability to enter and persist in the slug's intestines, they performed a laboratory experiment, during which 79 slugs were exposed to a total of 1,185,000 fluorescently-tagged worms, which was followed by microscopic analysis of the dissected slugs.

The nematode worms, at various stages of their lifecycle, were able to invade and persist for a short time in slug intestines. Through further analysis of the slug feces, the team confirmed that the worms survived the entire passage through the digestive system, and were subsequently excreted alive.

The nematode worms persisted for not more than one day in the slugs' intestines, suggesting that the worms may achieve longer travel by repeated invasion of different slugs.

As the worms enter and leave the slug without any obvious harm and the slugs survived large worm infestations without any obvious damage, it is thought that this could be a harmless interaction where at least the nematodes benefit. However, further research is needed to rule out a parasitic association, as the authors say that there could be detrimental effects on the slug's intestinal bacteria.

The team suggest that the worms take advantage of the moist environment within some invertebrates, especially snails and slugs which constantly produce mucus to aid locomotion. Slug intestines may be even more advantageous because they also provide a bacterial community which may be exploited as food for the worms.

1. Photos are available here: http://bit.ly/1JM9sjI The credit information provided in the filenames must be included in any re-use.

3. BMC Ecology is an open access, peer-reviewed journal that considers articles on environmental, behavioral and population ecology as well as biodiversity of plants, animals and microbes.

BMC Ecology is part of the BMC series which publishes subject-specific journals focused on the needs of individual research communities across all areas of biology and medicine. We offer an efficient, fair and friendly peer review service, and are committed to publishing all sound science, provided that there is some advance in knowledge presented by the work. 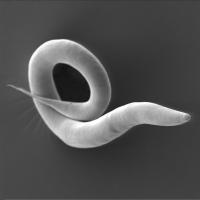