Creating sustainable markets poses particular obstacles: a sustainable market must be continuously shaped and reshaped. This is the conclusion of three researchers in business administration and innovation at Linkoping University, who have used the Swedish biogas market as a case.

Supply and demand for biogas have increased considerably in Sweden during the past decades, but domestic production has ceased to grow in recent years. However, hopes are now high for a significant expansion, not least as several international companies have entered the market. These include Finnish Gasum, French AirLiquide (owner of Fordonsgas), and suppliers of biogas facilities such as Hitachi Zosen Inova. From its initial form as a local and regional phenomenon operated by municipalities and public transport companies, the market has now become both national and international, to a certain extent. Sweden now imports biogas, mainly from Denmark and other countries through the gas pipeline on the western coast of Sweden.

Only a few studies have examined how sustainable markets arise, are created and shaped. Three researchers at Linkoping University, who are also active in the national Biogas Research Center (BRC), have now published an article about this in the Elsevier journal Environmental Innovation and Societal Transitions. Based on previous research into sustainable transitions and the shaping of markets, they have developed a general framework that they use to analyse the development of the Swedish biogas market.

They draw three conclusions. The first is that exchange practices must be enabled for a market to arise, in which the actors also must agree on what kind of value the exchange involves. For a long period, the biogas market grew in local and regional contexts, and the actors were forced to frequently justify their choices. The use of biogas was questioned, and this led to intense debate in many municipalities, such as Helsingborg, Jönköping and Skövde. In the true meaning of the word, a "market" for biogas has only existed during the past 10-15 years.

"Initially, the market was solely within the public sector, while now large commercial companies have entered and brought with them more strict demands for profitability. You must be able to set a price and communicate all the benefits, such as the biofertiliser produced", says Mikael Ottosson, associate professor in marketing at the Division of Business Administration. He is one of three authors of the article, together with Hans Andersson, senior lecturer in business administration, and Professor Thomas Magnusson, who carries out research on innovation at the Division for Project, Innovations and Entrepreneurship.

The second requirement is to construct a narrative about the sustainable technology and product.

"Sustainability is directed towards the future and needs storytelling. You must make it credible that the solution offered can help to create a sustainable society. This is important not least to attract investors and to gain public investment support and subsidies", says Thomas Magnusson.

Finally, the third requirement is to prove the system, and provide reliable evidence that the technology works in practice. The requirements here are severe.

"The burden of proof lies with people who want to change things. In the case of wind power, the advocates have had to provide counter-arguments against many types of misgiving, such as that peaks in power generation will overload the network in stiff winds. Biogas has faced objections following problems with engines, empty filling stations and a bus that caught fire", Mikael Ottosson tells us.

"What is new is always seen as the poor relatives from the countryside who must prove themselves and deliver at least the same quality as what is already in place, independently of the sustainability aspect. This makes sustainability an additional component that must be considered, in addition to price and quality", he says.

The conclusions constitute three parts of a conceptual framework, each of which contributes to creating different types of value in a market.

The advantages and enablers of biogas are also its Achilles heel. Certain conditions must be fulfilled: not only must substrate be available, but there must be surrounding agricultural land where the biofertiliser can be used. But who should drive the large volume growth?

"The municipal level was optimal during the construction. Building a national or international market for biogas is more challenging than for other sustainable technologies. Solar panels and wind turbines are standard products today that can be pushed to the market and installed. Instead, biogas solutions are often based on local collaborations in networks with many different stakeholders", says Mikael Ottosson.

In the case of biogas, Sweden is unique in the degree to which the gas is used as vehicle fuel. Other countries mainly produce electricity and heat from biogas. The number of biogas-fuelled vehicles is now increasing again in Sweden, although not to the extent predicted by proponents. This may be due to a lack of models available. Even so, between January and November 2019, 5,000 new biogas cars were registered in Sweden. A major advance for biogas is, however, expected when both Volvo and Scania launch new engines for heavy trucks powered by liquid gas.

"Markets are created and recreated: the phenomenon is rather circular. But the main questions are, as always: Who will take the costs and make the investments required in the construction of a sustainable market? and: How much is to be financed by the public sector?", Hans Andersson states.

Sustainable markets must be created and defended 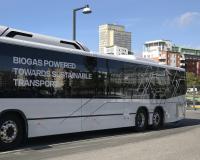