A team of scientists from Nanyang Technological University, Singapore (NTU Singapore) has developed a test kit for malaria that delivers results in 30 minutes. The kit could facilitate the diagnosis of malaria in the field, as the equipment needed is anticipated to be lightweight, easy-to-use, and able to detect the disease in its early stages.

According to the World Health Organisation (WHO), an estimated 229 million people suffered from malaria in 2019. The disease, transmitted by mosquitoes, caused the deaths of 409,000 people across 87 mainly developing countries.

Efforts to treat and control malaria in developing countries and rural areas are hindered by high cost and the lack of infrastructure. Rapid diagnostic tests (RDTs) for malaria are unable to detect infections during the early stages of the disease, but can give false positive or negative results. They also do not determine the severity of the infection.

Associate Professor Liu Quan, from NTU's School of Chemical and Biomedical Engineering, who led the study, said: "Compared to current solutions, the NTU-developed test kit is able to detect malaria infections even when the number of parasites in the blood are low, especially during the early stages of the disease. It is also able to quantify the number of parasites in every test, which allows physicians to monitor their patients' progress in fighting the disease.

"We hope this could help in malaria control and elimination. The goal of our test was to reduce the reliance on lab equipment for the detection of malaria, which is an important step towards malaria field diagnosis. We had a simple goal in mind - to find a tool that can be produced at a low cost and was accurate enough to do quick screening."

Assessing the test, Professor Laurent Renia, Director of the Respiratory and Infectious Diseases Programme at NTU's Lee Kong Chian School of Medicine who was not part of the study, said: "The NTU test kit would help fill the gap in malaria detection for a tool that is accurate, sensitive, fast and cheap. As the team's test kit would be easily deployable, operable without extensive training, and would not rely on the usage of microscopes, it could be useful for malaria specialists that are conducting research remotely or clinicians without access to laboratory equipment."

The study was published in the peer-reviewed scientific journal Sensors and Actuators B: Chemical in May. The NTU team has filed a patent application for their technology, on top of an earlier patent they obtained in 2017.

Digested blood - the key to the test's effectiveness

Microscopic examination of blood infected with malaria parasites remains the current global benchmark to confirm an infection. However, this requires microscopes and a level of expertise to conduct the process, which are both often not available in many health facilities in several malaria-endemic countries and rural areas.

The made-in-NTU test kit could reduce researchers' reliance on complex laboratory equipment as it would only require a blood sample and water to operate (see Image 1). The kit works by detecting hemozoin, a by-product formed from the digestion of blood by malaria parasites, which is a unique indicator of the disease.

First, ten microlitres of a patient's blood, which is less than a drop of water, is mixed with water to force red blood cells to release the parasites contained.

A pump within the test kit then sucks in the blood mixture to bring it in contact with several chemical patches, which cause hemazoin to light up. The flashes of light are then picked up by a detector, known as a Raman spectrometer, which determines whether an infection is present or not, as well as its severity.

To validate the accuracy of the test kit, the researchers loaded human blood infected with malaria parasites into the chip. The test could detect early stage parasites at a level of 125 parasites per microlitre of blood, which is a higher sensitivity than currently available rapid diagnostic tests.

The researchers estimate that each test would cost about US$1 per chip to manufacture and at this price would facilitate low-cost point-of-care field testing on a large scale.

The team hopes to find an industry partner to work with and to conduct further trials on their malaria test kit to improve its sensitivity and functionality. 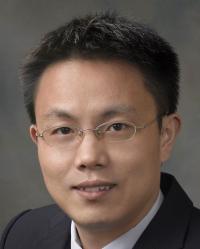