The Classic Maya culture thrived in rainy times and then collapsed in turmoil as the weather turned to drought, according to new research.

An international project including Durham University, UK, and led by researchers from Pennsylvania State University, USA, and ETH Zurich, Switzerland, has created a precisely-dated record of rainfall from cave deposits in the Classic Maya region, and compared it to a 'war index' of hostile events recorded on stone monuments. The research has enabled the team to create a unique historical timeline linking climate and culture in unprecedented detail.

The war index is based on how often certain keywords occurred in Mayan inscriptions on carved stone monuments, and the researchers were able to chart how increases in war and unrest were associated with periods of drought.

The new datasets provide a unique insight into how a civilisation prospered and developed, expanding into large cities, during a period of favourable climate and then collapsed following climate change between AD 660 and 1100.

Maya rulers commissioned monuments to record events and the research team found the frequency of texts carved on stone monuments pointing to status rivalry, war and strategic alliances increased significantly between AD 660 and 900, during the drying trend.

The findings are published in the journal Science.

Professor Douglas Kennett said: "It is not just climate drying and drought that is important, but the preceding conditions that helped stimulate societal complexity and population expansion. This set the stage for societal stress and the fragmentation of political institutions later in time as conditions became drier."

Dr Baldini said: "The rise and fall of Mayan civilisation is an example of a sophisticated civilisation failing to adapt successfully to climate change. Periods of high rainfall increased the productivity of Maya agricultural systems and led to a population boom and resource overexploitation. The progressively drier climate then led to political destabilisation and warfare as resources were depleted.

"After years of hardship, a nearly century-long drought from 1020 sealed the fate of the Classic Maya."

The role of climate change in the fall of the classic Maya civilisation had previously been suggested, but remained controversial due to dating uncertainties in previous climate records.

The research team reconstructed rainfall for the last 2000 years using the chemistry of stalagmites from Yok Balum cave in Belize. The cave is located 1.5 kilometres from the Classic Period Maya site of Uxbenká and is close to other major Maya centres, all influenced by the same climate systems.

Then, because the Mayans recorded political events and their dates meticulously on carved stone monuments, the team was able to compare its climate reconstruction with the changing frequency of warfare. These war-related events were recorded by Dr Martha Macri (co-author, University of California, Davis) in the "Maya Hieroglyphic Database" and the well-dated occurrences of these words were compiled and the frequency compared to changes in climate.

Professor Kennett said: "The historical texts carved on stone monuments provide a rich record of wars, marriages, accessions of kings and queens, and the capture and killing of warriors from competing groups. The events are incredibly well dated with the Mayan long count calendar system.

"The end of this tradition of stone carving between AD 800 and 1000 marks the widespread collapse of the Classic Maya tradition."

Harriet Ridley, a Durham University PhD student who co-authored the paper, added: "The multi-disciplinary nature of this study contributed to its success. Meticulous archaeological archiving and an extremely well-dated rainfall reconstruction mean that we are able to make confident links between political events and rainfall shifts."

Climate changes in the region were driven by the shifting position of the Intertropical Convergence Zone (the ITCZ, a belt of rainfall encircling the Earth) and the frequency and strength of El Niño events. The researchers believe that during the Maya Collapse, the ITCZ may have failed to reach far enough north resulting in catastrophic drought.

Using chemical and mineral analyses of stalagmite layers, the researchers were able to reconstruct a record of weather in the Maya region over the past two millennia.

The rainfall reconstruction matches up well with historically documented climate events, including a drought between AD 1535 and 1575 which was linked with reduced agricultural productivity, famine, war, disease, widespread death, and population relocation. The documented cultural effects of this drought provide an analogue for what might have occurred during the Classic Maya Collapse, the researchers believe.

The collapse of Classic Maya civilization linked to drought 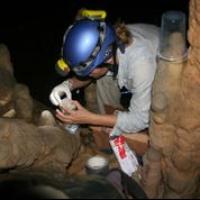