DETROIT – A treatment regimen is safe and effective for restoring skin pigmentation in vitiligo patients, according to a Henry Ford Hospital study.

"Our findings offer patients with vitiligo worldwide a renewed hope for a bright future in the treatment of this disfiguring disease," says Henry Lim, M.D., chair of Dermatology at Henry Ford and the study's lead author. "Patients with lesions on their face and arms could have a more rapid response to the combination treatment."

Henry Ford dermatologists described the repigmentation results as "superior," and said the treatment combination holds promise as a future therapy for the more than 50 million people worldwide living with vitiligo. It affects about one in every 100 people in the United States.

The study will be published online Wednesday in the Journal of the American Medical Association-Dermatology.

In a multi-center study led by Henry Ford, dermatologists sought to evaluate the safety and effectiveness of a treatment combination of afamelanotide, a drug that induces skin pigmentation, and phototherapy using narrowband ultraviolet-B rays (NB UVB). Phototherapy, or ultraviolet light therapy, is the treatment of choice for many patients with widespread vitiligo. It has been shown to be effective, though the degree of repigmentation varies.

Dr. Lim, an international vitiligo expert, says afamelanotide "enhances the ability of the UVB to induce repigmentation of the skin."

Afamelanotide is in the process of being submitted for approval from the U.S. Food and Drug Administration for use in treating vitiligo.

Vitiligo is a skin disease that causes the skin to lose color and develop white patches that vary in size and location. It develops when cells called melanocytes are killed by the body's immune system, causing the area of skin to turn white because the cells no longer make pigment. Vitiligo is more noticeable in individuals with darker skin tones, but it affects all races and ethnicities.

While vitiligo is neither contagious nor life-threatening, there is no cure. However, it causes low self-esteem and depression for those living with the disease.

The Henry Ford study represents its latest research into investigating new treatment options for vitiligo. In a 2012 study published in the Journal of the American Academy of Dermatology, Henry Ford dermatologists showed the benefits of skin cell transplant surgery, called melanocyte-keratinocyte transplantation or MKTP. Henry Ford has since performed more than 190 MKTP procedures on patients from Michigan, 23 other U.S. states and Canada.

For this new study, 55 patients were enrolled at four sites – Henry Ford, Icahn School of Medicine at Mount Sinai in New York and Vitiligo and Pigmentation Institute of Southern California and University of California Davis' Department of Dermatology.

The study was funded by Clinuvel Pharmaceuticals. 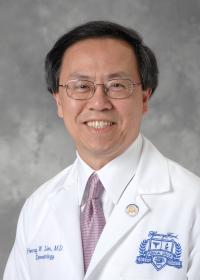