Sixteen stunning images, and the fascinating stories behind them - such as the beautiful golden egg of a tiger moth, and tiny robot printers that use salt or dust instead of ink -- have today been revealed as the winners of the 2019 Research as Art awards.

While most entries were from Swansea University researchers, this year's competition saw more submissions from other universities, including institutions in France, USA, Bulgaria, Finland, South Africa and Singapore.

The overall winner is "Living with Vernon", which captures research aimed at unearthing the stories of eight people who were committed to a private mental hospital in Briton Ferry in south Wales, called Vernon House, between 1850 and 1880.

The submission is a drawn image representing people from the period, superimposed onto a map of the area, with an accompanying story. It was created by Katherine Murray of the College of Arts and Humanities.

Research as Art is open to researchers from all subjects, with an emphasis on revealing hidden research stories, as well as composing a striking image.

It offers an outlet for researchers' creativity, revealing the hidden stories and attempts to humanise science and research. The project also celebrates the diversity, beauty, and impact of research at Swansea University - a top 30 research university.

82 entries were received from researchers across all Colleges of Swansea University and from other institutions, with titles such as:

A distinguished judging panel of senior figures from the Royal Institution, Nature, Research Fortnight magazine and Digital Science selected a total of sixteen winners. Along with the overall winner, there were seven other awards and eight runners-up.

Overall winner Katherine Murray described the research behind her entry:

"During the 1800s every county had to have a lunatic asylum, Glamorgan included, but the county was too poor to build one, so they 'rented' space from the private asylum in Briton Ferry, Vernon House.

My research is centred around eight private patients that were committed by their families between 1850 and 1880. They were ordinary middle-class people who suffered different mental illnesses. My research will bring to life both the house and people, their lost voices and their fate. At the moment they are a few historical documents; faceless. I hope to not only bring them to life but also inform about early care for the mentally ill."

"Research as Art is an opportunity for researchers to reveal hidden aspects of their research to audiences they wouldn't normally engage with. This may uncover their personal story, their humanity, their inspiration, and emotion.

It can also be a way of presenting their research process, and what it means to be a researcher; fostering dialogue, and dissolving barriers between universities and the wider world." 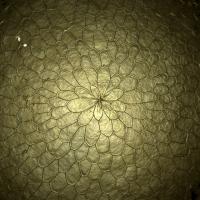