Scientists are planning for a future in which superbugs gain the upper hand against our current arsenal of antibiotics. One emerging class of drug candidates, called AMLPs (antimicrobial lipopeptides), shows promise, and an August 18 study in the Biophysical Journal explains why: they selectively kill bacterial cells, while sparing mammalian host cells, by clumping together into microscopic balls that stick to the bacterial membrane--a complex structure that will be slower to mutate and thus resist drugs.

"The pressing need for novel antibiotics against resistant strains of bacteria and fungi has become a global medical concern," says senior study author Alan Grossfield of the University of Rochester Medical Center in New York. "Our new insights into how AMLPs work as groups rather than individually could optimize the development of these molecules as a new class of anti-resistance antibiotics."

AMLPs could represent a promising alternative to traditional antibiotics. Past studies have shown that these synthetic compounds have potent activity against a range of pathogens and can clear infections in mice. Moreover, AMLPs are less vulnerable to evolved resistance because they disrupt the structure and function of microbial membranes. To evolve drug resistance, the microbes would require many big changes to alter the mixture of lipids composing the membrane. In addition, a variety of critical proteins embedded in the membrane depend on the membrane's current composition of lipids, so membrane changes that would prevent AMLP function would also tend to hinder the function of the bacteria's own membrane proteins.

Despite their advantages, progress in developing AMLPs suitable for the clinic has been limited by the lack of a molecular-level understanding of their mode of action. In particular, it is not clear whether and how the tendency of AMLPs to form clumps improves their antimicrobial activity. To address this question, Grossfield and graduate student Dejun Lin used molecular-dynamics simulations and free-energy calculations to examine whether the tendency of AMLPs to aggregate into larger balls, called micelles, affects their ability to bind to membranes.

Moreover, the membrane composition in mammalian cells was associated with a higher free-energy barrier, which interfered with the speed and efficiency with which the drug entered the membrane, whereas binding to the bacterial membrane was more kinetically favorable. Grossfield and his collaborators are now using insights from this study to examine whether it is possible to improve the function of related molecules.

"The biggest surprise was that the binding kinetics--in essence, how quickly the lipopeptides get into the membrane--are crucial to understanding how they work," Grossfield says. "It turns out that it's not enough to look at the drug molecule itself, it's also important to consider whether it works by itself or as part of a group. The micelles attack bacterial membranes much faster, which explains why they kill bacteria without hurting the infected animal."

Taken together, the new findings suggest that the formation of micelles is a strong determinant of binding kinetics and selectivity for microbial cells. "Controlling this process by chemically modifying AMLPs to promote their aggregation will be important for optimizing their potency while minimizing side effects in host cells," Grossfield says.

"Because AMLPs are small and stable, manufacturing, processing, and storing them is relatively easy and inexpensive, making them suitable for drug development," he adds. "We are optimistic that AMLPs will eventually make their way into the clinic as a much-needed option for overcoming antibiotic resistance."

The Biophysical Journal (BJ), published by Cell Press for the Biophysical Society, is a bimonthly journal that publishes original articles, letters, and reviews on the most important developments in modern biophysics--a broad and rapidly advancing field encompassing the study of biological structures with a focus on mechanisms at the molecular, cellular, and systems level using the concepts and methods of physics, chemistry, mathematics, engineering, and computational science. For more information, please visit http://www.cell.com/biophsj. To receive media alerts for BJ or other Cell Press journals, contact press@cell.com.

How an emerging anti-resistance antibiotic targets the bacterial membrane 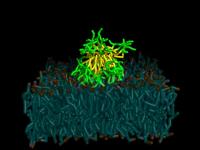