The number of emerging economy nations with policies in place to support the expansion of renewable energy has surged more than six-fold in just eight years, from 15 developing countries in 2005 to 95 early this year.

Those 95 developing nations today make up the vast majority of the 144 countries with renewable energy support policies and targets in place, says REN21's Renewables 2014 Global Status Report. And the rise of developing world support contrasts with declining support and renewables policy uncertainty and even retroactive support reductions in some European countries and the United States.

Launched at the UN-hosted Sustainable Energy for All in New York, the 2014 report credits support policies with a central role in driving global renewable energy capacity to a new record level last year — 1,560 gigawatts (GW), up 8.3% from 2012. More than one-fifth — 22% — of the world's power production now comes from renewable sources.

According to REN21: "Markets, manufacturing, and investment expanded further across the developing world, clearly illustrating that renewables are no longer dependent upon a small handful of countries."

In 2013, an estimated 6.5 million people worldwide worked directly or indirectly in the renewable energy sector.

REN21's 2014 report says policy mechanisms continue to evolve. In 2013, feed-in policies in many countries shifted towards premium payments in the power sector, and continued to be adapted for use in the heating sector. New policies advanced or managed the integration of high shares of renewable electricity into existing power systems, including support for energy storage, demand-side management, and smart grid technologies.

"Over the last 10 years, continuing technology advances and rapid deployment of many renewable energy technologies have demonstrated that the question is no longer whether renewables have a role to play in the provision of energy services, but rather how we can best increase the current pace to achieve a 100% renewables future with full energy access for all."

"For this to be become reality, current thinking needs to change: continuing the status quo of a patchwork of policies and actions is no longer sufficient. Instead, technology developments, finance models as well as stable and predictable renewable energy policies need to be systematically linked across the public and private sectors in order to support and drive the transition process."

Says Christine Lins, Executive Secretary, REN21: "The past decade has set the wheels in motion for a global transition to renewables, but a concerted and sustained effort is needed to achieve it. With increasingly ambitious targets and innovative policies, renewables can continue to surpass expectations and create a clean energy future."

The report covers recent developments, current status, and key trends on all renewable technologies and end-use sectors. By design, it does not provide analysis or forecast.

The Renewables Global Status Report relies on up-to-date renewable energy data, provided by an international network of more than 500 contributors, researchers, and authors. 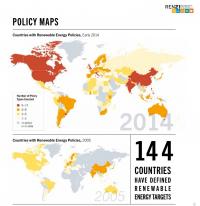