The anemonefish is more familiarly known as the clownfish, as its bright colouration reminds of the face painting of a clown. The striking and unique colouration consists of white stripes on an orange background, but its biological function has remained a mystery thus far. Now, a study by the researchers of the University of Turku and the University of Western Australia has revealed new information on the colouration of the fish.

The clownfish (Amphiprion ocellaris) belongs to the subfamily of clownfish with the same name consisting of approximately 30 different species. All these species live in a close symbiosis with sea anemones. Sea anemones are sessile animals that have tentacles containing toxic stinging cells that help them to capture their prey and protect them from enemies. However, they do not harm clownfishes, and when danger threatens, the fishes seek shelter among the tentacles.

Every clownfish species has adapted to living in a symbiosis with only one single or a few sea anemone species.

"The intensities of the defence reactions of different sea anemone species are very different from each other, and the venomousness of their stinging cells varies considerably. Correspondingly, there are significant differences between the colouration of different clownfish species," says one of the researchers of the study, Evolution Ecologist Sami Merilaita from the University of Turku.

Dr Merilaita and Dr Jennifer L. Kelley, Adjunct Research Fellow in the University of Western Australia, carried out a comparative analysis which dealt with the evolution of the colouration of the fishes, for example, in relation to the characters of the sea anemone species living in a symbiosis with the fish.

"We found a connection between the colouration and the toxicity of the sea anemone species. The clownfishes that have adapted to living in a symbiosis with the more venomous sea anemones carry less white stripes. This shows that the extraordinary colouration and pattern of the fish has a protective function," Kelley says.

According to the researchers, the white stripes help the clownfish to conceal among the tentacles of the sea anemone.

For the fishes hosted by the more venomous sea anemones, the warning function of the colouration is more important that the camouflaging one: the striking colouration of the fishes can function as a warning signal which chases out natural enemies. In nature, the bright colouration of organisms often indicates a high potency of venom.

When danger threatens, the clownfish seeks shelter among the tentacles of the sea anemone 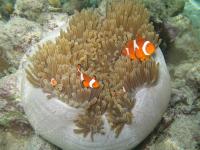 One sea anemone often hosts a group of a few clownfishes